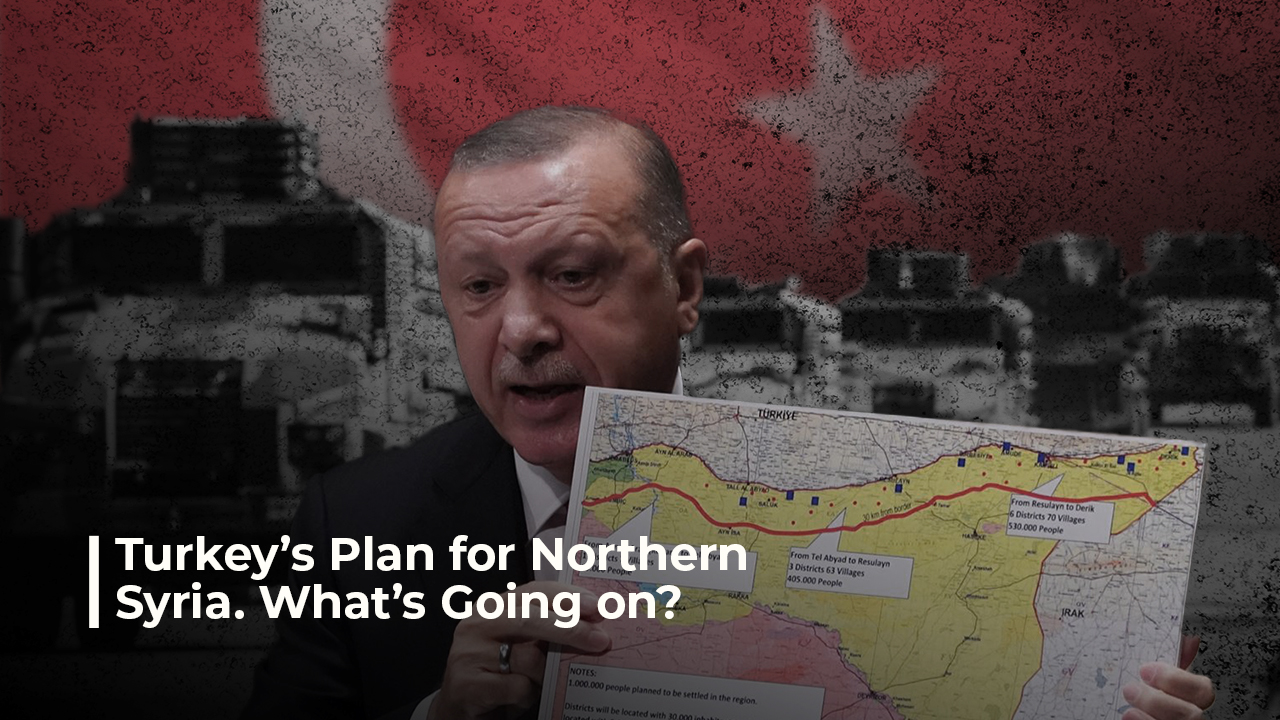 Since the Turkish government first announced intentions to complete the establishment of a 30km safe zone along its southern border in northern Syria many have questioned the reasoning and timing of the planned operation. Among the chief reasons given by the Turkish government are the safe resettlement of displaced Syrians, and security concerns, due to the presence of internationally recognized terrorist organizations active in the region.

Since the Turkish government first announced intentions to complete the establishment of a 30km safe zone along its southern border in northern Syria many have questioned the reasoning and timing of the planned operation. Among the chief reasons given by the Turkish government are the safe resettlement of displaced Syrians, and security concerns, due to the presence of internationally recognized terrorist organizations active in the region.

Hamza Tekin, a political analyst specialized on Turkey and the Middle East, spoke with L24 about the operation saying its goal is “to oppose terrorist organizations and terrorists, (namely) the terrorist SDF (PKK affiliate) and those that work with them”

According to the UNHCR Turkey is host to the world’s largest refugee population since 2014, currently hosting 3.7 million Syrian refugees, (65.8% of the global total) and close to 320,000 refugees from other nationalities. For more than a decade Turkey has provided safe haven and protection as well as educational, medical, and financial support to expelled Syrians from all over the war-torn country.

While many EU countries and other western nations with greater resources have balked at the responsibility of assisting these people, Turkey has shouldered the burden for the world since 2012. With an ailing economy suffering from inflation and hardships brought on by the pandemic and regional and international wars such as that in Ukraine and neighboring Syria, the Turkish government is hard pressed to find sustainable, long term, solutions. The best and most obvious answer is to secure the means to allow displaced Syrians to live, in safety, within their own country, and when able, in their own villages, homes and regions.

One of the primary reasons for the proposed operation to remove PKK affiliate PYD and SDF forces from the cities of Tal Rifaat, Manbij and Ain al-Arab is to facilitate the voluntary return of tens of thousands of refugees to their homes, and to establish safe housing and services in those areas. Previous Turkish-led operations in the border area resulted in 500,000 refugees being able to return home.

Brig.-Gen. Hamadeh explains, “This region contains Arab, Kurdish-Arab, and Kurdish-only villages, so the operation is not against an ethnic, racial or religious component. Currently, there are about 400,000 Kurds in Turkey, who have been displaced by the PKK.” Securing these areas would allow previously displaced Arab and Kurdish Syrians to return to their homes and villages.

The two major obstacles in the Turkey’s plans are opposition from the US, who have an interest in continuing to use the PKK aligned forces as on-the-ground proxies against ISIS and to protect US interests in the region, and Russia who would rather see the areas returned to direct Assad regime control or, at the least, see the PKK forces more closely aligned with the regime.

Tekin spoke on his views on the Kremlin’s outlook, “Russia is more inclined to work something out with Turkey, it has political motivations to deal well with Turkey, specifically due to the war in Ukraine, because Russia is at odds with the West and is fighting a war against the West, and there is currently no other nation in the world that is more beneficial for Russia than Turkey. Russia wants to return to having good relations with Turkey.”

While many analysts posit that Turkey cannot feasibly hope to achieve its goals without the “green light” from one, or both, of these players. Hamza Tekin disagrees, “Turkey doesn’t need to get a green light from the west, and they made that clear in their speech from the beginning. Turkey will see to its interests in spite of Washington, in spite of the West … Turkey is in a strong political and military position, they don’t depend on military aid or weapons from the west in their counter terrorism operations, the opposite … they don’t take weapons, training or political advisors from the West… the Turkey of today is not weak, their position is strong.”

Regarding the US, Turkey is able to use its veto power in NATO to try to gain some concessions. Currently, both Finland and Sweden have applied for membership, which Turkey has vocally opposed. The reasons are two-fold, historically Sweden has a history for “supporting” PKK elements, providing them refuge and offering a means for the organization to fund-raise, there are even sympathetic members of the Swedish parliament who are Kurdish Swedes, Sweden opposed previous Turkish operations and could cause issues in the future. Finland suspended weapons sales to Turkey as a punitive measure for its previous cross-border incursion and has, similar to Sweden, been vocal in its opposition to Turkish anti-terror operations in Syria and Iraq.

It’s also believed that Turkey’s opposition is also a means of possibly appeasing Russian interests, or at the least, not aggravating Russia and trying to maintain a delicate balance. Turkey has not been as aggressive with Russia in terms of Ukraine responses and seems invested in having, at the least, civil relations with its Syrian based rival, as Ankara wants to maintain both good political and economic ties with Russia.

To-date neither the US nor Russia have publicly given support to Turkish operations, despite seemingly favorable statements from the Kremlin, Russian and Syrian regime troops have moved into the areas that Turkey is set to control. In addition for the first time ever Russia has conducted joint patrols with YPG/PKK troops in the areas and heavy flights of Russian helicopters have been seen daily flying above Manbij and the areas under PKK control.

However, some analysts have posited that in Tel Rifaat and Manbij to the west of the river, the US might turn a blind eye to Turkish maneuvers noting that Turkey’s arguments on Tel Rifaat have been largely met with understanding, based primarily on a failure for the YPG/PKK elements to vacate the region as agreed upon in the 2019 Sochi deal brokered with Russia.

Some concessions by the US, may be reached, provided Turkey relents in regards to Sweden and Finland, while many think Russia’s preoccupation in Ukraine and desire to keep a status quo with Ankara may also permit Turkey to receive some form of “go ahead” from the Kremlin. Sergey Lavrov, Russian Foreign Minister mentioned that Syria’s future will be addressed in trilateral talks between Russia, Turkey and Iran, whether Ankara intends to wait that long is unknown as recent statements from Turkey have declared operations could begin within 72 hours or a week.

PKK in the crosshairs

Erdogan said, “The main target of these operations will be areas that are centers of attacks on our country, therefore, the military operations are supposed to target the areas of Ain al-Arab, Tal Rifaat, Ain Issa and Manbij, given that these attacks have been launched from these areas. They have intensified targeting areas north of Aleppo and some areas of southern Turkey since the second half of 2022.”

One of the greatest dangers to the region posed by the PKK are its ties to Iran. In Sinjar region, along the Iraq-Syria border the Hashd as-Shabi and Sinjar Resistance Units (YBS), a Yazidi affiliate of PKK facilitate Iranian weapons transit to Syria, posing a real threat to Israel. Nicholas Heras, a fellow at the Center for a New American Security, said, “There is a deep concern within the SDF over the extent to which the United States is looking to use SDF forces as a counter to Iran in Syria” noting that the ties between Iran and the YPG/PKK are well established and can be a further means for Iran to project force into the region and gain additional influence.

Turkish concerns for security are widely recognized, US State Department spokesman Ned Price said, “We recognize Turkey’s legitimate security concerns on Turkey’s southern border” while Lavrov stated, “We are aware of the concerns of our [Turkish] friends about the threats posed on their borders… including by feeding separatist sentiments by illegally controlled US units in Syria”.

Despite concerns, the establishment of a safe zone for Syrians to reside in would take pressure off of both refugee communities and host nations, would allow Kurds, Arabs, and other Syrians to return to their homes, it would unify secured territories and counter efforts of bad actors such as Iran while protecting both Syrians and Turks from hostile terrorist elements such as the PKK.

What remains to be seen is the level of cooperation and ease by which Turkey can achieve these goals, or if they will, instead, wait for more promises, like those of the 2019 Sochi agreement, which have yet to be realized, enacted or enforced.