On Monday the Sarmada Chief of Police, Moataz Suleiman, released a statement regarding the latest developments surrounding the case of Nahla Othman’s death, it said: “Last Wednesday morning we received information about the death of the girl, Nahla Othman, an IDP from Kafr Sijnah living in Kelly. Some locals reported to us that her father used to imprison and torture her. We immediately brought in the father for interrogations and he confessed to chaining the girl and putting her in an iron cage”.

The Chief added: “In order to find the true cause of death, we took permission from the Public Prosecution to exhume Nahla’s body and surrender her to a forensics laboratory in Idlib city. The coroner’s report revealed that the cause of death was cardiac and respiratory failure caused by food remnants. After hearing the father’s interrogation, the testimonies from eye-witnesses in the IDP camp, civilians in the town, and Nahla’s sisters, it was clarified to us that the father wasn’t involved in killing her nor was he the cause of death”.

“We got information that the father used to put her in an iron cage and chained her up for fear of losing her in and outside the camp” he added. “She was suffering several diseases which affected her nerves (Sensory nervous bullous, skin ulcers, and osteoporosis), making her unable to feel anything. According to the father he was forced to take such an action”.

“It was very evident that the father didn’t take proper care for his daughter, especially in absence of the mother and other siblings. We concluded after the investigation that he neglected his daughter and will be prosecuted for child-neglect”, said the Chief of Police.

The Chief of Police wished to direct a special message to those working in the media, requesting them to be accurate in reporting the news, to take their information from verified sources, and to confirm and objectively report the news. 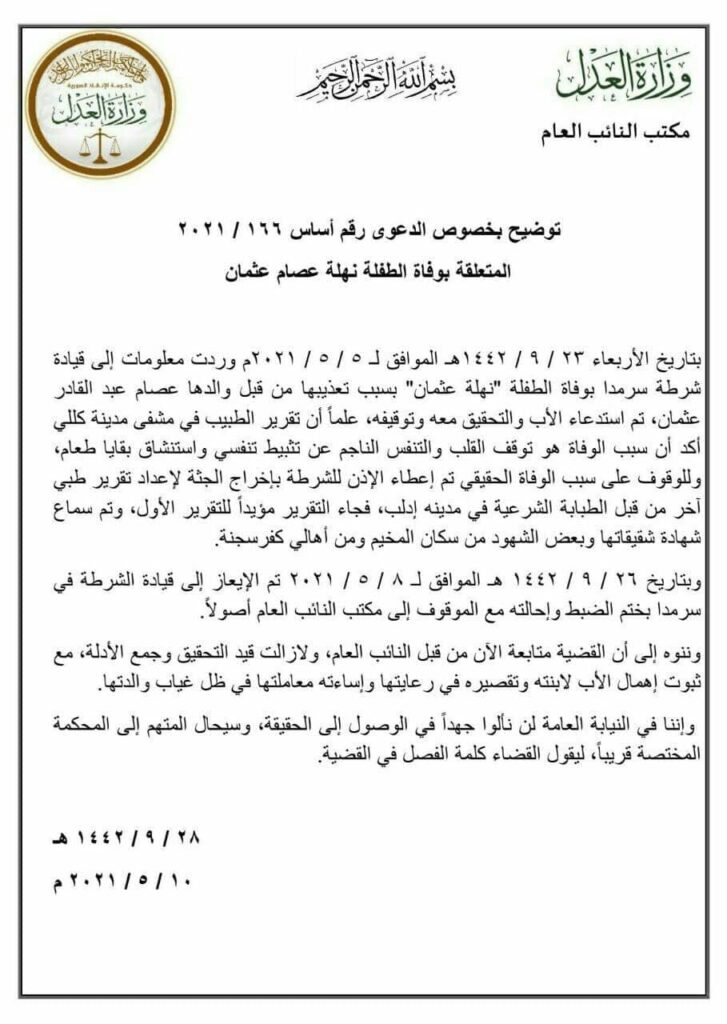