Iran has exerted a lot of effort in linking their Capital, Tehran, to Beirut through Baghdad and Damascus. This is part of their Iranian Crescent project which aims at controlling the Euphrates and Tigris Basins, having access to the Mediterranean sea, and effectively achieving a land-bridge between Iran and their Lebanese Hezbollah militias.

Sources have stated to Orient News that the road between al-Bukamal and Damascus has come under the control of 4 main Iranian militias; The Fatimiyoun, Zainabiyoun, al-Nujaba and Hezbollah. The regular and irregular border crossings with Iraq are under their joint control. The Deir ez-Zor desert is mainly under the Pakistani Shiite Zaynabiyun militia control, while the desert area leading to Palmyra, Sukhna and the surrounding areas in eastern rural Hama are under the control of the Afghan Fatimiyun militias.

Before the return of ISIS cell attacks, the Fatimiyun’s control remained imposed on the entire Raqqa desert. The desert is now controlled jointly by Iranian militias and local Assad militias. Russian forces are sometimes present in the area by air and ground patrols.

The Nujaba militia and the Lebanese Hezbollah are mainly concentrated in rural Aleppo, Hama and Homs, far from the deserts. With al-Nujaba controlling the entire eastern and southern countryside of Aleppo and parts of its northern and western countryside, in addition, they also control large swathes of south rural Idlib, east rural Hama, and north rural Homs. Hezbollah is mainly concentrated on Homs and has almost complete control over Homs and its countryside, their control extends to al-Nabk and the northern entrances to Damascus.

From al-Bukamal to Damascus

According to the source, the route that Iran secured from Iraq to the Syrian Capital is as follows: From the Iraqi al-Qa’im border crossing with Syria to Huwayjat Baghuz town in Syria. From Huwayjat Baghuz to Suwaygh – al-Bukamal -Mayadin – Wadi al-Malha – Shula- Sukhna desert located at the borders of Deir ez-Zor and Homs Governorates. From Sukhna towards Palymra Airport and Tiyas Air Base, to the desert road in eastern Homs leading towards al-Qaryatayn leading to Damascus through the Homs – Damascus highway.

It has been documented that the Iranian militias in Syria use the areas they control to transport weapons, fighters and drugs to the Lebanese borders. 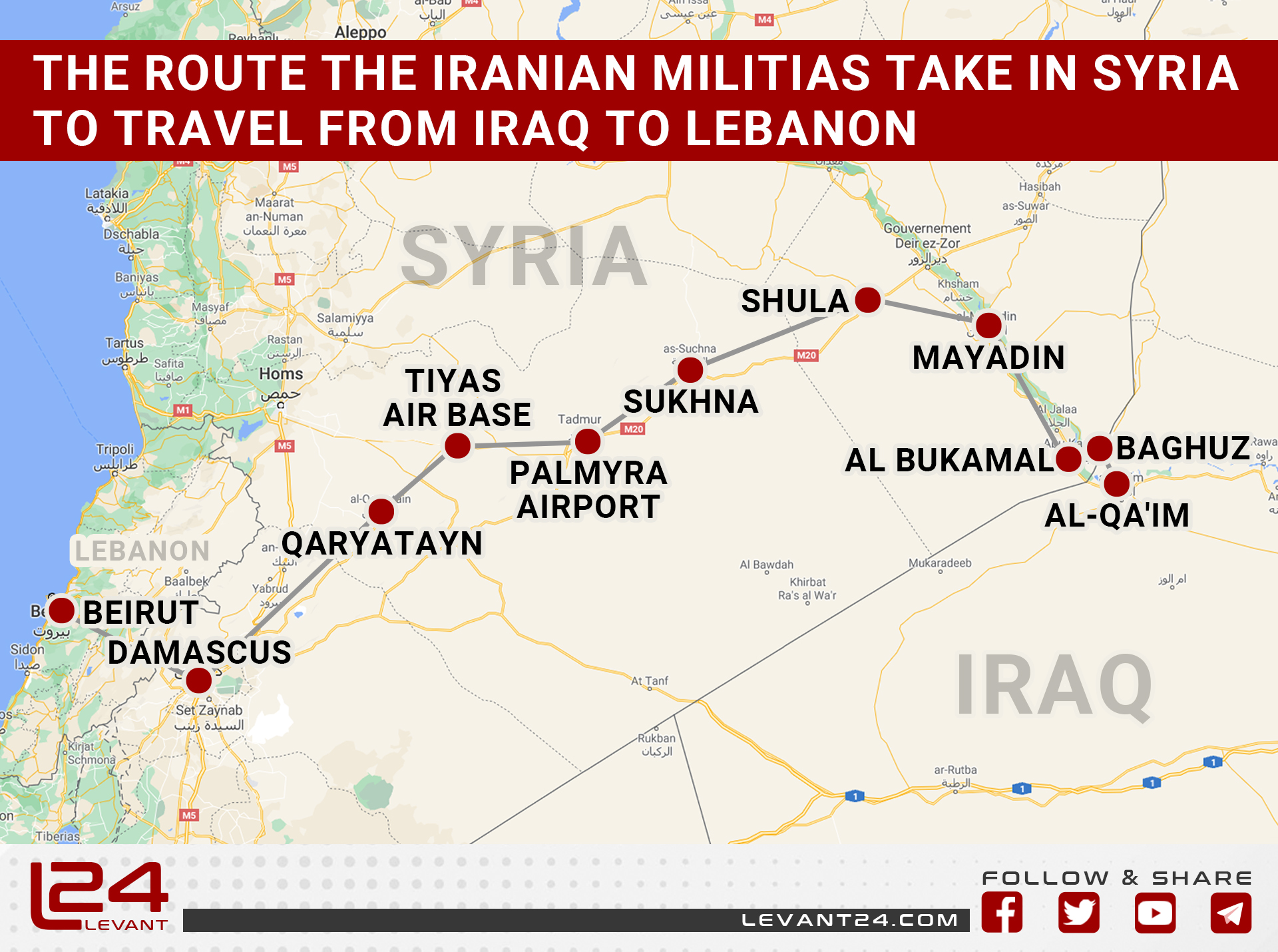