On Friday, the United Nations High Commissioner for Refugees objected a Danish resolution allowing it to relocate asylum seekers to countries outside the European Union while their cases are being processed.

The UNHCR considered that such decisions are aimed at evading responsibility, and they are in violation of the 1951 Refugee Convention, and other agreements that guarantee residence and protection for refugees. It indicated that it will continue to engage in discussions with Denmark in order to abandon the decision and continue to maintain its international obligations related to the asylum file.

The Danish parliament had made amendments related to the Aliens Act, allowing the country’s government to compulsorily transfer asylum seekers to a third country, while their cases are being processed. The Danish parliament passed the legislation on June 3rd with 70 votes to 24. Under this law, the government can remove refugees arriving to the country to immigration centers in a non-EU partner country while their applications are reviewed, and if it is rejected then the applicants will have to leave the host country to where they came from. Those who receive refugee status will not automatically be transferred to Denmark, but rather be granted protection in the partner country.

Denmark has yet to sign a deal with a partner country to host the asylum seekers. “If you apply for asylum in Denmark, you know that you will be sent back to a country outside Europe, and therefore we hope that people will stop seeking asylum in Denmark,” said Rasmus Stoklund, the parliament’s spokesman on immigration and integration, according to Reuters.

Denmark’s Social Democrat-led government has taken one of the harshest stances on refugees in the EU. The country was the first European country to revoke residency status for some 200 Syrian refugees earlier this year, claiming that the regime held areas were safe enough to return to.

Denmark has a population of 6 million with 10 percent of it being immigrants and their descendants. The country has also been a prominent advocate for refugees and asylum-seekers. It was one of the first countries to become a party to the 1951 UN Refugee Convention. According to Michala Clante Bendixen, refugees only made up 2% of all foreigners who were granted a residence permit in Denmark the last couple of years, it had received 733 new refugees during 2019. It was in 2015 that it received the highest number with 21,000 new arrivals with 8,608 of them being Syrians. 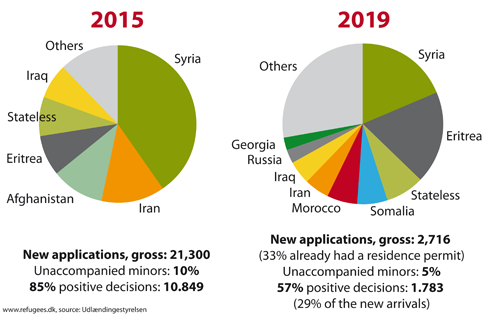