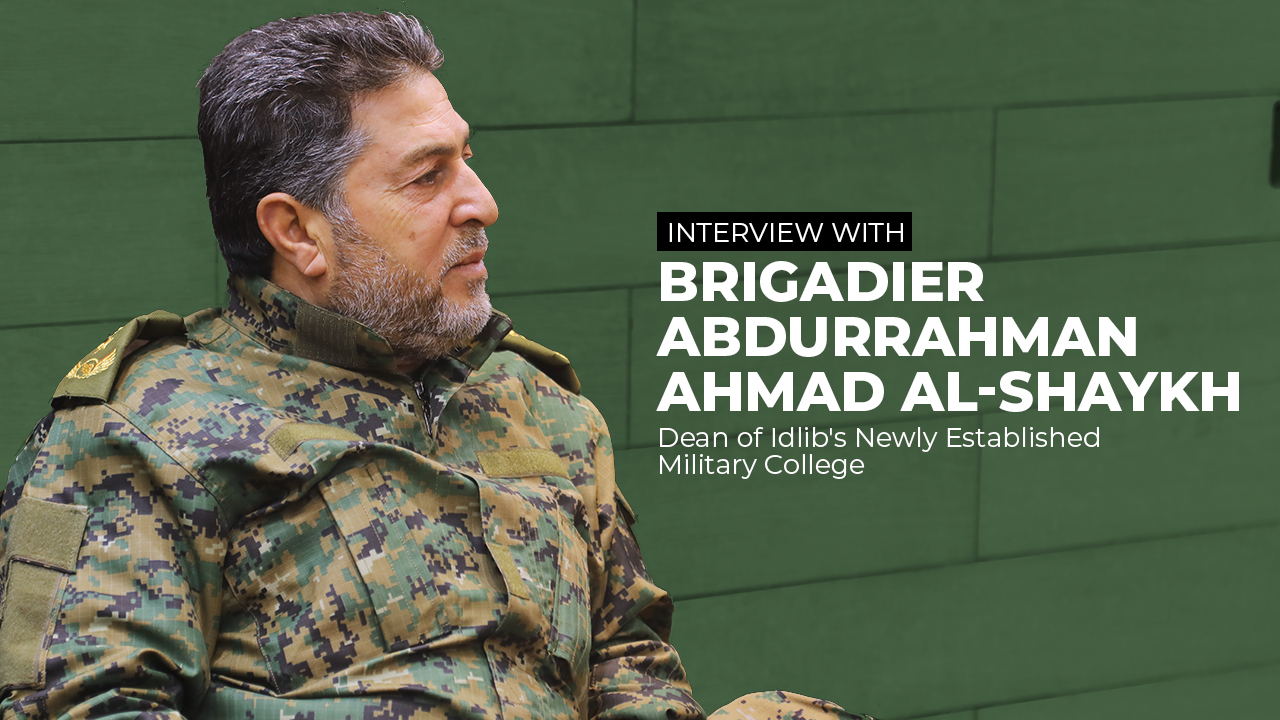 Levant 24 conducted an interview with Brigadier Abdurrahman Ahmad al-Shaykh from Atma, he graduated from the military academy in 1984-1985 with the rank of lieutenant general. He defected on 1/5/2012 and joined the revolution in support of the Syrian people, at that time he was a Colonel General. We asked him about the newly established Military College under the Prime Minister’s office of the Syrian Salvation Government.

Levant 24: We have heard of the establishment of a military college in Idlib, some say it’s a milestone for the revolution after a decade of war. What’s the goal of this Military College and why was the formation of the Military College delayed until now?

Brigadier al-Shaykh: The goal is to train capable officers and provide them with the most recent military sciences so they become capable military commanders that supervise sections, units and military formations.
We had the idea to establish a military college before, this idea wasn’t implemented because there wasn’t any government or anything similar in the liberated areas that wanted to adopt the idea.
As for today, the Syrian Salvation Government and the revolutionary forces have agreed upon its necessity, as such, they have adopted this idea and since the year 2020, preparations were made towards its establishment. When the project was finalized, its opening was announced.

Levant 24: What benefit will it have to the revolutionary forces?

Brigadier al-Shaykh: It will provide our forces with competent military officers that are trained in a number of specializations. They will be provided with military sciences, which they master in both theory and practice, and in turn, they will relay this knowledge to those under their command.

Levant 24: With some defected regime officers that left the liberated areas towards Turkey, do you possess enough cadres to train officers?

Brigadier al-Shaykh: Yes, although many defected officers left the liberated areas, there are still capable officers and professionals who had a great contribution throughout the war against the Syrian regime. So we have enough cadres capable to teach the current courses in military sciences and other specializations.

Levant 24: Can anyone enroll into the Military College? What are the qualifications necessary?

Brigadier al-Shaykh: Yes, the college is open to all capable members of the revolutionary forces. However, they must possess a high school diploma or its equivalent to be specified by the admission announcement. Furthermore, the age requirement for the ranks of officers and conscripts is determined by the college administration. Also, they must be medically fit for military service and must undergo examination by a specialized military medical committee. Finally, they must have a history of good conduct, reputation and morals. Specifically, not previously convicted of a felony or misdemeanor involving moral turpitude.

Levant 24: Which military methodology or school will the college follow?

Brigadier al-Shaykh: We have worked towards a unified methodology by combining diverse military schools to adapt to the demands and nature of the current state of the conflict and the current power balance.

Levant 24: Is the college linked to any foreign entity? How is this institution funded?

Brigadier al-Shaykh: According to the government decree of the establishment of the college, the college is a legal entity that enjoys administrative and financial independence. Its budget is provided by the Salvation Government.

Levant 24: Can you tell us more about the current military capabilities in the liberated areas, are they able to conduct defensive or offensive operations against the regime?

Brigadier al-Shaykh: Most certainly, our readiness is at the highest level. Specifically, on the technical, military and intelligence domains. The expertise attained by the military forces through the battles they waged against the regime, the Russian occupation and the Iranian militias, has significantly increased the fighting capabilities of the revolutionary forces.

Levant 24: How was the idea of a military college received?

Brigadier al-Shaykh: The establishment of this institution was a necessary step. More and more voices within military circles argued that there will be a need for more competent officers in the near future due to the constantly evolving battle field dynamics, which necessitates the establishment of a military college.

We are entering a new stage in our blessed revolution where we are institutionalizing the armed forces by transforming our revolutionary forces from a group of factions into a state army with a clear military strategy and a unified command.

Levant 24: To conclude, do you wish to add anything?

Brigadier al-Shaykh: We hope that our new college becomes successful and that it will bloom, we hope to see it as a beacon that breathes new life into the military forces that defend our people and our blessed revolution.