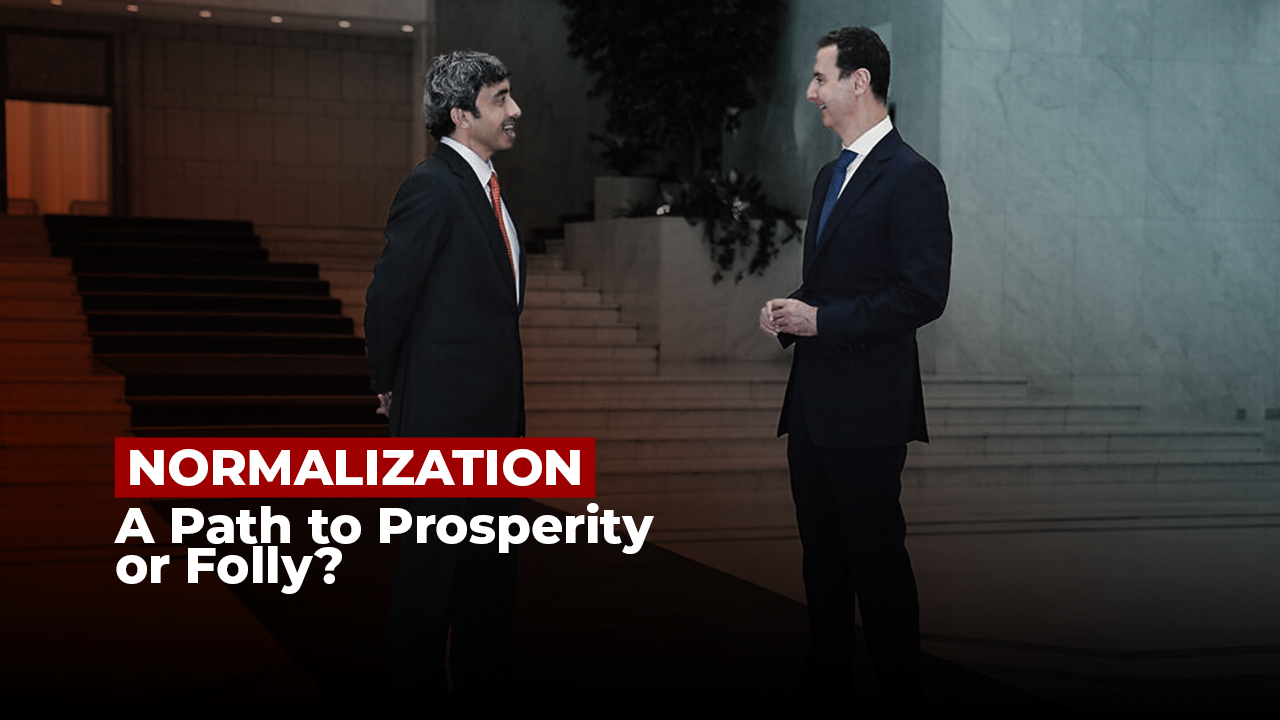 There has been a recent movement towards normalization with the Assad regime, in hopes of creating stability and “ending” the more than decade long war. However, many analysts and specialists on conflict and the region are of the view that these steps will not, in fact, stabilize the region nor benefit the Syrian people, but conversely, prolong the suffering while exacerbating the prevailing long-term dangers for both Syria and the international community.

Since the outbreak of the Syrian conflict in 2011, many of the Arab states have had an inconsistent relationship with the Assad regime. Oscillating between ostracization and tacit support. Despite the implications of the name, the Arab League has lacked a uniformity of vision towards the Assad regime and how to respond to the resultant war springing from 2011’s peaceful protests.

Syria’s southern neighbor, the Hashemite Kingdom of Jordan (HKJ) has been relatively reserved in its interactions. At the revolution’s onset the Kingdom stood in line with much of its neighbors and other Arab states in their condemnation of the Assad regime’s violence against its own people. Jordan’s head of state, King Abdullah II, was the first Arab leader calling on Assad’s resignation.

The first half of the war saw the two countries at odds. For its part, the Syrian regime and Assad were very clear on considering Jordan a part of American plots against Syria and enemies at war with the country. While the official stance of Jordan was that the regime had exceeded limits, lost legitimacy and broken with the norms of the Arab states and efforts at mediation and diplomacy.

However, last year, after the war saw its 10-year anniversary and entered its 11th, Jordan’s stance changed. Jordan, and Abdullah II, are at the forefront of countries and Arab states leading the efforts of normalization with the regime, begging the questions: why now, and how might these efforts and the efforts of other nations affect the Syrian people and their struggle for dignity and freedom.

L24 was able to consult several experts on the topic and gain their views on the issue of normalization, its causes and possible ramifications, Dr. Kamal Abdou, PhD in modern and contemporary history, lecturer at the Faculty of Political Science in Idlib University and London based Dr. Saad Rashed al-Faqih, founder of Movement for Islamic Reform in Arabia (MIRA).

Dr. Abdou explains: “There is no single reason for normalization with the Assad regime, but there are multiple reasons, including those related to restoring security and stability to the region according to the countries’ view of the matter, eliminating drug trade, in addition to eliminating what they call terrorist cells and restoring security to the ruling Arab regime, since the Assad regime is one of the pillars of this Arab regime … there are other reasons, such as returning [Syria] to the Arab political fold, returning refugees, and restoring the region’s economic artery, which is a great need for Jordan.”

At the beginning of the Arab League and Gulf States’ intervention it seemed that there were half-hearted efforts, lacking unification on all fronts, Dr. Saad al-Faqih mentions that: “The Arab regimes have no dogmatic or strategic disagreements with the Syrian regime. They also have no disagreement in the way of ruling because they are all tyrannical regimes. …normalization of relations between these regimes and the Syrian regime is the natural state.”

“The only issue certain regimes have, like Saudi Arabia and certain Gulf states, is the proximity of the Syrian regime to the Iranian regime. … [While] previously it was merely a diplomatic relationship, now it changed into military presence and cooperation.”

Dr. al-Faqih makes clear that the issues between the states were in terms of geopolitical alliances, and efforts weren’t so much aimed at regime change as they were at reorientation of allegiances, to the “Arab” states rather than “Persian” Iran.

On the subject of the UAE and Syrian Revolution the Khattabi Center for the Study of Revolutionary Wars (KRW) stated that: “… the UAE closed its embassy in Damascus, following the outbreak of the Syrian revolution, and the Arab and Gulf states’ decision to boycott the Assad regime. [However, at] a time when it supported the Syrian opposition, the UAE maintained bridges of communication with the Assad regime, his family and businessmen close to him, … gradually withdrawing from the Syrian conflict, until it settled to restore relations with the regime as of 2018.”

As for the recent pushes by the UAE in normalization with the Assad regime and their prominence in this process KRW observes that: “the most prominent of these reasons can be summarized in the following points: economic concerns (investment opportunities in case the country enters into a political settlement and the phase of reconstruction and infrastructure construction), fear of the Turkish role in the north, or the rise of Islamic movements to power, and the UAE’s ambition to play a leadership role at the regional level.”

There’s a general consensus that primary motivators for normalization, for many countries, including the Assad regime, and its neighbors are financial. Normalization will not only revive the ailing Syrian economy but will give a boost in revenue and trade to other Arab states via various projects utilizing Syria as in interlocutor as well as a direct trading partner and the inevitable reconstruction projects, which many countries are eager to capitalize upon.

Meetings between Jordan, Egypt, Lebanon, the UAE, and recently Syria, focused on what Laith al-Ajlouni of the Atlantic Council writes: “the idea of the ‘New Orient’ that emerged months ago as an economic, developmental and political alliance in its own right. The lowest level between Iraq, Jordan and Egypt, and its objectives were determined by the sectors (oil, energy, transport, commodity trade, and employment) … [it] proposed solutions for the crises in Syria, Lebanon, and Iraq through improved regional economic integration. Interestingly, Syria is also a cornerstone in these solutions as a corridor for gas and electricity—via Egypt and Jordan—to Lebanon.”

Among the proposed reasons of normalization posited by both proponents and analysts have been to minimize the influence and importance of Iran within Syria, and within the south in particular however many specialists on the subject have mentioned that Iranian influence will not be overshadowed nor dissuaded by such overtures from Arab states or the international community.

KRW writes, “the idea of the  Arab normalization as a means for limiting Iranian influence, and that the steps of the Arab countries, led by the UAE, Jordan and Egypt, aimed at restoring relations with the Assad regime, found within the so-called ‘Jordanian plan’, is countered by the statements of the Iranian axis welcoming a visit the Emirati foreign minister to Damascus, and considering it [normalization] a victory for the regime… is enough to refute these allegations, as Assad’s recovery means a recovery for Iran, not only in Syria, but throughout the region.”

Oula al-Rifai of the Washington Institute for Near East Policy shares a telling statement on Iranian policy for Syria, while quoting Iranian military commander Mehdi Taeb who declared in 2013, “Syria is the 35th province and a strategic province for Iran.” al-Rifai elaborates on the extent of Iranian entrenchment and expansion writing: “Iranian influence in Syria is not confined to the military realm … Over nearly a decade, Tehran has institutionalized its program in Syria to a degree far beyond the work of Qasem Soleimani or any other Iranian leader. Iran not only has a strong military presence on the ground, it also relies on a wide array of methods (e.g., social, cultural, religious, economic) to influence local dynamics, with plans to sustain this work for decades to come. With or without Assad in power.”

A Return to Normalcy?

The question remains, is normalization really the only path forward? Is a return of the Assad regime to the global stage, as an accepted government inevitable, as some claim, and is it what is best for Syria, its neighbors, the region and the global community?

Dr. Abdou answers: “We have many parties that will be affected by the normalization process, including the Assad regime, the revolution, and the SDF (Syrian Democratic Forces) militias, in addition to the regional states. Therefore, each party will be affected according to the situation that it will live in after normalization, but the regime in particular will be the biggest winner from this normalization through its political and economic revival. As for the other parties, such as the SDF and the revolution, this normalization will certainly harm both parties …”

Abdou notes that the process is fundamentally unilateral, benefiting the Assad regime while continuing the “status-quo” of disfranchisement and uncertainty for all other parties, a far cry from the perceived “stabilization.”

Conversely, Dr. al-Faqih offers his analysis on the matter, approaching the ideological and political effects of the process observing: “I do not believe that the Syrian revolution will be harmed, but the opposite, I believe that discovering the reality the Arab regimes play will benefit the Syrian Revolution. … Many leaders in the Syrian Revolution that used to believe in the good-will of Arab regimes and were awaiting political, military, economic, diplomatic and intelligence support [will now understand the reality].”

Contextualizing the global ramifications of normalization and the long term effects on the region and international stage al-Rifai first addresses the fallacious perception of the war’s end, “The recent push by a number of Arab states to normalize relations with the Assad regime is based on the false premise that the war is over, and it is necessary to restore ties to lobby Damascus to change its relationship with Iran.”

He surmises that in lieu of regional stabilization the converse will occur: “Engaging with the Assad regime will further erode international norms. …  financial support will certainly fuel other atrocities. The undermining of international norms could even in turn justify domestic abuses by these Arab states simply because Assad got away with it. … [Normalization] will embolden regime allies regionally (Russia and Iran) as well as create a vacuum of power and shift in dynamics that is conducive to an ISIS resurgence as similarly seen in Iraq between 2012-2014.”

While on the surface the ideas espoused by those in favor of normalization seem based upon sound premises, further examination shows that in both the short and long term such steps only serve to prolong the suffering of more than half of the Syrian populace and embolden bad actors such as Iran, and both state and non-state perpetuated criminal activities such as drug trafficking and terrorism.