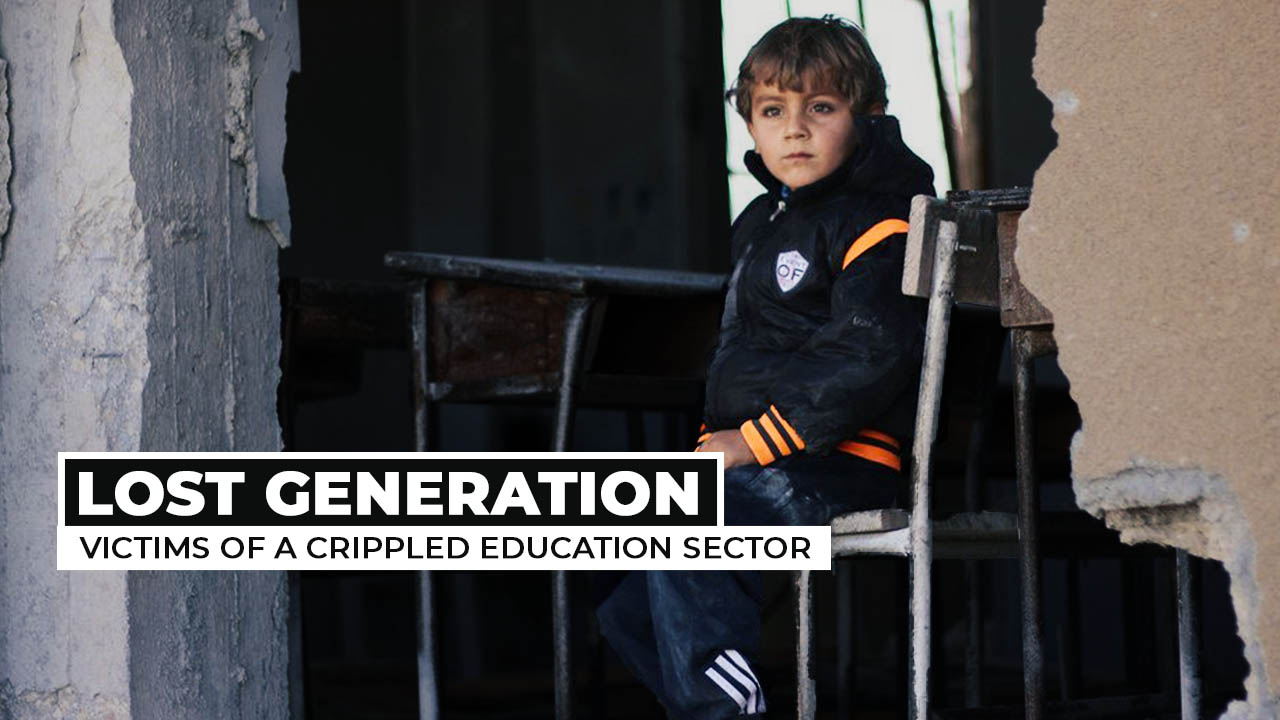 Under the freezing cold, Ahmed Latouf wakes up every morning to reach the industrial area on the outskirts of Idlib city by 9am. His work as a manual laborer until sunset, after which he receives 20 Turkish Lira ($1.48), is barely enough for any individual for a day’s work, due to the rising inflation. Ahmed is only 12 years old, and he left school a few years ago. “I wanted to become an engineer but the circumstances in Syria forced me into this,” says Ahmed. And he is only one among the hundreds of thousands of children who are forced to join what can become a lost generation in Syria.

Over 2 million children, which accounts for a third of Idlib’s population, are out of the education system in Syria, and while the obvious reason is the war, among the underlying causes are the targeted bombardment of schools and educational institutes by the Syrian regime and the lack of funding by NGO’s. Since the beginning of the war in 2011, the Assad regime has destroyed more than 700 schools, while around 30 thousand children were killed by the same regime. According to a school principal in the city of Idlib, Ahmed al-Maglaaj, “The targeting of schools, infrastructure, and civil gatherings have forced many students’ families to migrate to refugee camps erratically; and concerned about their children, many of the parents do not send them to school fearing for their children’s lives. When the people were displaced from their villages, cities, and towns, the camps did not have schools, and the situation remained that way for several years. Some even tried to build schools by themselves, but they lacked even the basic essentials of a school”.

In addition to the atrocities caused by the regime, the war dragged many, if not most, Syrian families into poverty. When asked about the main reasons for the deprivation of education, the Ministry of Education of the Syrian Salvation Government commented, “poverty is what led to many children to leave education and start working to secure their livelihood.” According to Ben van der Merwe, a data journalist at GlobalData Media, one of the driving factors of outflow of refugees towards the West is poverty and instability caused by war. 2.6 million children are internally displaced since the beginning of the war in Syria. CSIS,  an American think tank, stated that Western donor governments contribute about $2.5 billion a year in humanitarian assistance to Syria. It added that the regime’s government has manipulated aid for more than a decade, withholding it from opponents, and directing it to allies.”

Donations have become the lifeline of many Syrian people living in the liberated areas. Although the support is commended, it mostly involves emergency aid like tents and food packs. According to Ahmed al-Maglaaj, “Education in Idlib was, and still is struggling as the donor organizations do not support formal education, but rather support issues of protection, psychological support, and awareness with 10 times that of education”. Therefore it is obligatory upon the supporting nations and organizations to focus on rebuilding the community, which starts with the infrastructure and education.  Mark Lowcock, United Nations relief chief, reminded in the annual pledging conference in 2020 that the amount of funding going to schooling for children is unclear, since many donors did not even mention education in their pledging statements. “Overcoming the obstacles lies in securing financial support and ensuring the delivery of books to schools”, stated the spokesperson of SSG’s Ministry of Education.

“We began to raise the level of education by securing the teaching staff, appointing mentors, and following up on schools for quality control”, he added. Ahmed al- Maglaaj says that “since the Salvation Government took control of matters, they introduced a unified curricula and opened of universities and institutes”. Nonetheless, with over 115 schools partially or completely destroyed, and over 210 schools used for refugee centers and other purposes, there is a lot of progress to be made. In the greater Idlib region, there are 263,276 primary and 138,172 secondary students, with a ratio of 1 teacher per 50 students which is double the world average. The Ministry of Education mentioned that “the consequences of the lack of funding lies in the lack of equipment, lack of cadres, fragmentation of education, and the lack of supervision of teachers, as they do not receive adequate salaries.”

With the start of the spring semester on February 5, teachers in the province of Idlib started on an open-ended strike under the name of “Dignity Strike”, demanding to be paid salaries after years of working as volunteers. A number of schools in the region issued a statement saying “we will stop work until the teachers’ due rights are secured”. On February 13 the Ministry of Education of the SSG published a statement in regards to the strike saying: “We will start implementing a support plan from the 15/02/2022 that will include most of the volunteer staff (teachers) and which will continue until the end of the current school year”.

Funding the education sector in the liberated areas is vital for a bright future, as most in the education sector in Idlib see that the international organizations are neglecting this important aspect of the society which plays a big role to fight poverty and stabilize the region. As the Ministry of Education remarks when asked about the importance of funding this sector, “the main goals are to increase the number of schools, elevate the level of educational cadres, and restructure the directorates”. By supporting the education in Idlib  children like Ahmad Latouf would not be forced to work, or migrate to distant lands in search of better life?