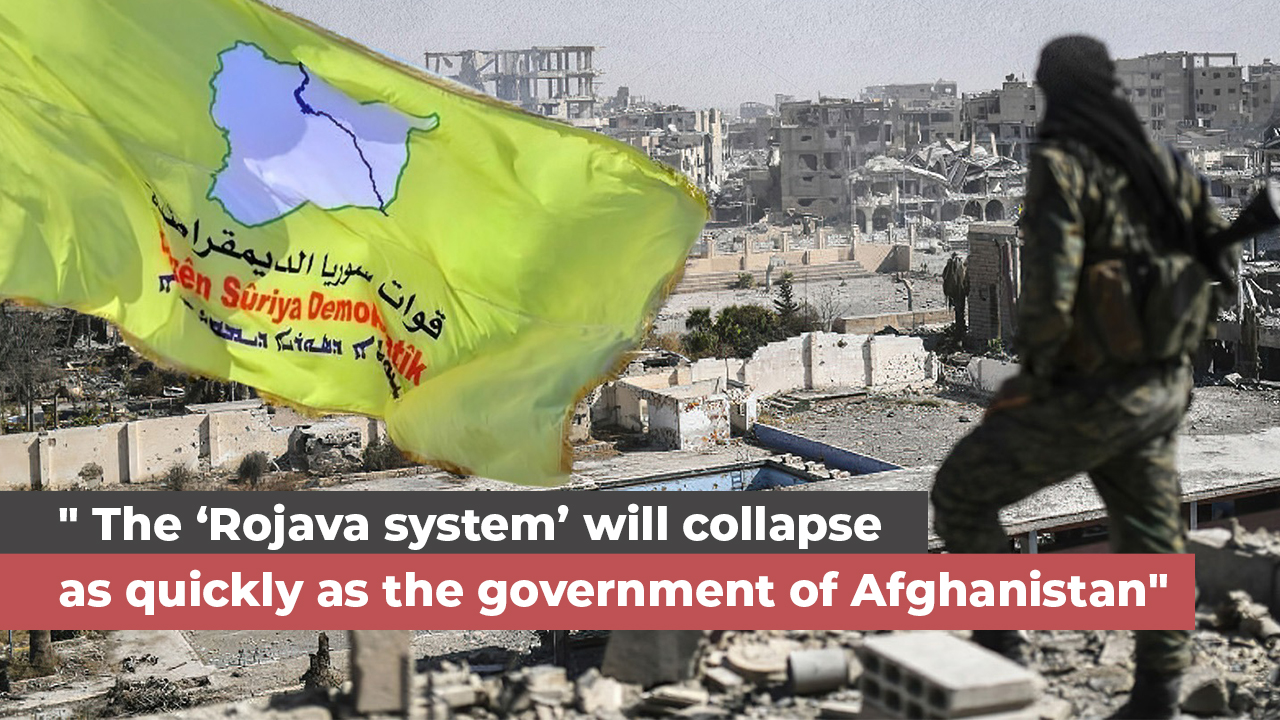 It was a cool night that Thursday. The guards were routinely making their rounds. The prisoners were already asleep. Nothing out of the ordinary, one would think, when suddenly explosions were heard and fierce fighting broke out. While attempts were made to storm the prison from the outside, the supposedly sleeping inmates started setting mattresses and other flammable materials on fire from the inside. The aim was to force every fellow inmate to break out as well, to make the pressure on the guards unbearable. Chaos broke out. Heavy fighting continued for days. War-like scenes kept the region in suspense. After nine long days and nights, the prison guards got the situation under control again with foreign air support and army units. Result: dozens dead. 140 of them army personnel. A high number of escaped prisoners.

One might think that this scenario was a clip from a movie. Unfortunately these were the actual events that took place in al-Hasakah, Syria, January of this year. ISIS performed a multi-pronged attack deep inside SDF territory, once again proving that they still play a significant role in the conflict in the east of the country. A conflict that still sees no end after a decade. While the world’s attention is focused on Ukraine, the flashpoint of Syria is far from extinguished. In the meantime, it has splintered and each region has its own characteristics and different actors, but they all have one common denominator: the Assad regime.

The country is divided and different states are trying to assert their authority with the help of forces on the ground. One would think that the SDF, with the US’ military and financial support in the east, would be the most successful project considering their control over most oilfields and farmlands. Yet events have, once again, proved this thesis wrong. In the days and weeks that followed, dozens of analyses were published attempting to explain how this tragedy could have happened. But the reasons may be much more apparent than one might think.

Kyle Orton states clearly: “IS momentum in the SDF/PKK zone has some underlying internal causes, most obviously, the group’s lack of legitimacy among the local Arab population,” is the damning verdict of the London-based researcher and expert on the Syrian conflict. “The legitimacy problem and the strengthened IS networks meant there were insufficient people willing or able to assist the PKK,” Orton adds in an interview with L24. There seem to be enough reasons for this rejection.

“No, no, there is no respect there”, replies Syrian Tribal Council spokesman Mudar Hamad al-As’ad upset when asked by L24 about the PKK’s relationship to Arab culture and tradition. “Rather, a number of man-made laws were enacted that abolished some Sharia laws, including those related to Islamic law, marriage, inheritance and some general customs and traditions…” This is far from the end of the story. The tribal spokesman lists other crimes such as “… recruiting girls, kidnapping minors and mixing in military courses or various training courses whose main aim is to sabotage and corrupt the current generation.” These allegations are not new.

Most recently, the Syrian Network for Human Rights (SNHR) published in a December 2021 report that of the 537 cases of recruitment by the Syrian Democratic Forces (SDF) since its inception, at least 156 children are still being recruited, and further noted that 19 children have been abducted and recruited since November, in the worst recruitment campaign targeting children since the beginning of 2021.

The fears of the Arab population go even further. Anas Shawah, Researcher at Jusoor for Studies Institute sums these up to L24: “This project is in no way connected to our region and its sons, in addition to the relationship that the SDF and the autonomous authority have with the regime, this relationship forms a danger for the sons of this region in the future and there is a real and constant fear of this relationship.”

Their collaboration with the Assad regime is also nothing new in and of itself and explains, among other things, why the US administration chose the Syrian offshoot SDF of the terrorist organization PKK as an ally: “The Obama administration did not want to clash with the Assad regime; Iran, because of the nuclear deal, was promised that its proxy regime in Syria would not be harmed, and the PKK is an old Damascus asset, so it could be trusted not to engage in anti-regime activities, while the rebels prioritized the anti-Assad struggle and wanted US help for that as part of the price for helping the US get rid of its main target. IS,” Orton discusses.

Claims that a spokesman for the SDF, Commander Mazloum Abdi, does not want to confirm: “We do not accept a return to the past. The Autonomous Administration has existed for ten years, and they (the regime) must accept it constitutionally,” he explained in an interview published in January for the Washington Institute. Although he does not deny a connection with Damascus, “Our relationships with the regime continue uninterrupted, and we want to resolve the differences between us,” he summarizes “that the Assad regime is not currently ready to reach solutions.”

This strategy of the SDF is not without consequences, some of them disastrous. “The reason for the increased activity of ISIS in the SDF controlled regions are the policies of the SDF from two aspects. The first is economic, which has led to a deterioration in the standard of living in the region, resulting in ISIS taking advantage of the financial situation of some locals to work as hidden ISIS cells, for which the SDF should bear responsibility,” Shawah notes.

The SDF is well aware of this, judging by its initial reaction to the events in al-Hasakah. According to the Syrian Observatory for Human Rights (SOHR), the SDF launched a major campaign to clear their ranks from “corruption” following the events that transpired in al-Sina’a prison. The Kurdish-led force arrested a leader within their own ranks who “lives in a villa and has a large number of private cars in Raqqa,” and hails from the Kurdish town of Kobane in northern Syria.

Yet the growing ISIS presence seems to have a very different reason, which is more in the nature of the SDF conduct: “The second angle is the general situation in which the SDF is trying to marginalize the Arab component in the region, the Arabs feel oppressed and in certain cases they would seek revenge against this marginalization…” 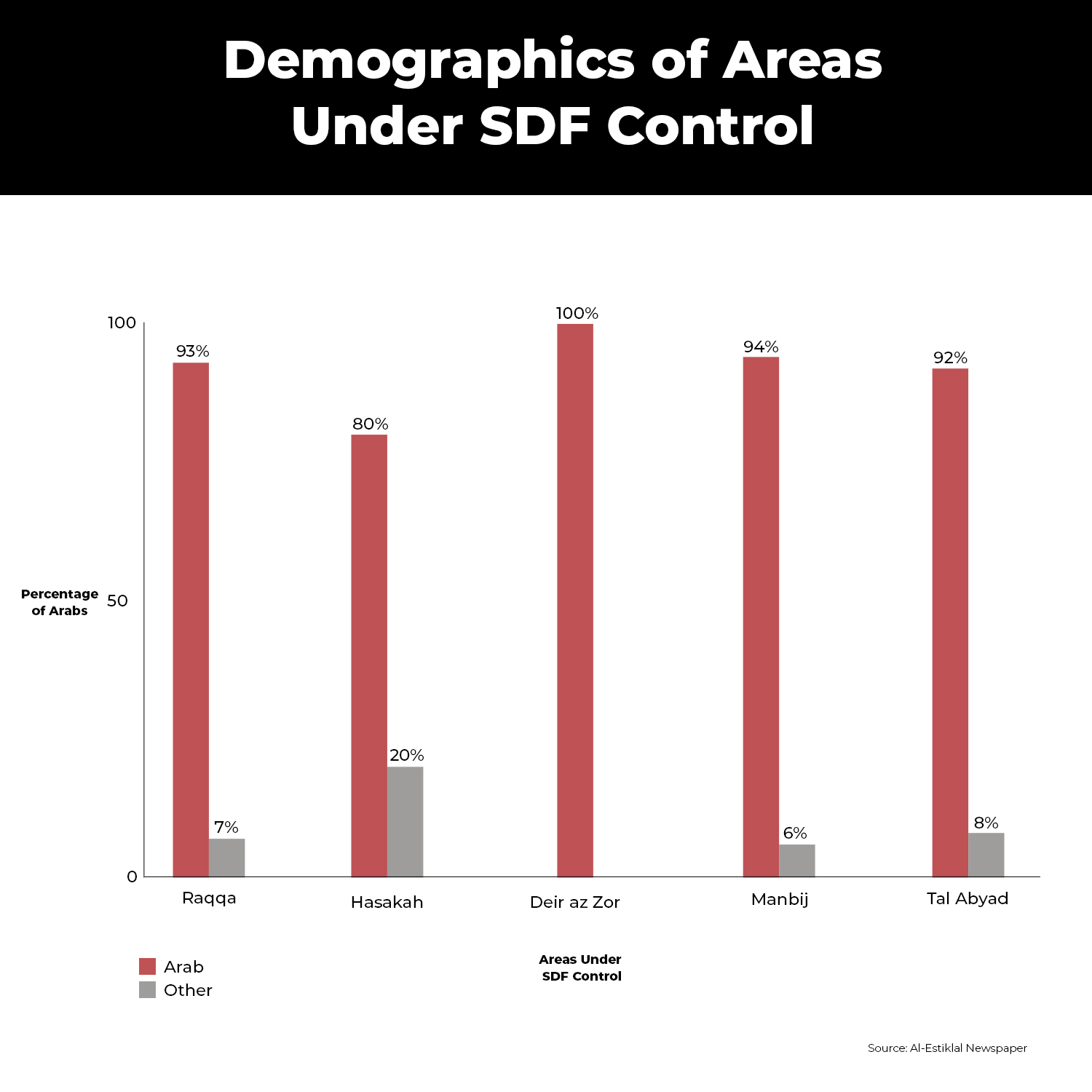 According to al-As`ad the list of crimes have no end: “Violations against the Syrian people committed “on a daily basis” by the terrorist SDF militia, including demographic change policies, burning of farmland and orchards, forced conscription, abduction of minors, recruitment of children, bulldozing of villages and farms, security raids and daily arbitrary arrests. The spread of sedition, plots, assassinations, bombings, cultivation and circulation of narcotics, in addition to  horrific massacres against the Syrian population in towns like Kishkish Al-Jabour, Qamishli, Amuda, Jabal Abdul-Aziz, the Ghweran, Aziziyah and Mufti neighborhoods in al-Hasakah city,  the villages of Al-Zour , Manbij, Tal Rifaat, Sheikh Maqsoud, Sur and Tabqa.”

“The destruction of the city of Raqqa and the perpetration of gruesome massacres against the Arab population is what drives ‘some young people’ to join ISIS to supposedly ‘protect themselves and defend the honor and the country’”, admits tribal spokesman al-As’ad bitterly.

It seems to be an affinity of the US to keep betting on the wrong horse. You don’t have to be Nostradamus to predict how the situation in eastern Syria will develop if Washington doesn’t reexamine the situation. “Should the US withdraw from Syria, the ‘Rojava system’ will collapse as quickly as the government of Afghanistan”, is Orton’s gloomy prediction. Anas Shawah goes even further. In his opinion, a complete withdrawal is not even necessary: “The SDF is subject to collapse even in the presence of international coalition forces, and if it is not a complete collapse, it will collapse in some areas.”

In such a scenario, the Syrian offshoot of the PKK would have no choice but to “make a deal with Damascus in the event of a US withdrawal and rejoin the regime.” This would help no one except Russia and Iran, which would only strengthen their positions of power in Syria and the Middle East respectively.

As long as the SDF area does not come under the control of the local population, further destabilization is to be expected. “The events in Al-Hasakah prison prove this, as the SDF security system has partially collapsed in one of the areas it controls. So what would happen if the coalition forces that secure it, train it and have air and ground cover in all its military and security operations were to withdraw?” asks Shawah rhetorically. A scenario one would rather not imagine.

Will US-Russia “green light” Turkey for a Syrian incursion?

“Accepting to visit a country half of whose population is displaced and unable to go back is immoral.”