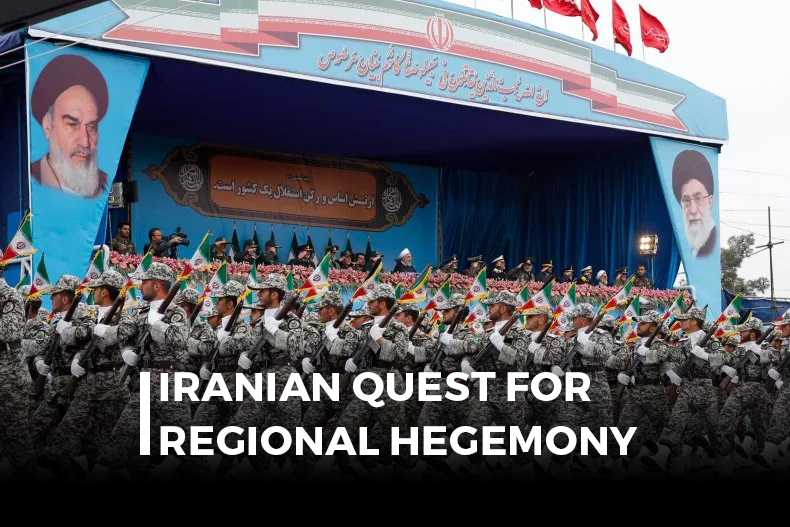 Since its establishment, the Islamic Republic of Iran has been the antithesis of stability and rule of law. From the notorious hostage taking of the US embassy staff to years of financing hijackings and terror groups like Hezbollah and instigating and inciting war and sectarian violence in places like Lebanon, Iran has had a singular vision of attaining power and influence, regionally and globally, by any and all means. Throughout its history Iran has been a source of chaos and determent to peace and stability. Without careful countermeasures it will continue to be a baleful influence on the global stage and a danger to the international community.

There’s been much speculation that since the start of Russia’s invasion of Ukraine that Moscow has been withdrawing from Syria to reposition and bolster troops in there.

Ömer Behram Özdemir of ORSAM a Levant expert spoke with L24, mentioning that while “Iranian presence is growing … in Daraa and Deir Ezzor, Iran and its proxies, are winning the race of influence against Moscow and its proxies. But for now in the northern Syria – where the border region with Turkey is, Russia is still the main power of the pro regime camp.”

However, statements from various intelligence agencies and recent redeployment to the north ahead of Turkish operations show that even if diminished in capacity Russia has yet to abandon its Syrian project.

Mehmet Emin Cengiz, research fellow at Al-Sharq Strategic Research, believes Russia is unlikely to give up its presence in Syria. “Russia has invested a lot in Syria over the years, and there has been a long-standing rivalry between Russia and Iran for influence in Syria. Even if Russia relocates some of its soldiers or withdraws them from Syria, it will not leave the field entirely to Iran.”

However the perception of its diminished role is enough to cause Damascus to look more towards Tehran in terms of sponsorship and support, and recently Assad has not only visited Iran, but seems to be leaning more towards Tehran than in previous years.

Since 2015 various initiatives and sanctions intended to reign in the rogue state have only seemed to emboldened Iran to escalate its destabilizing activities and enhanced its ability to bankroll terrorism and proxy wars.

L24 spoke with Noah Ringler, an expert from Georgetown University, regarding Iran’s aggressive posture in Syria and he commented, “Iran will also seek to provoke the US forces in the region with continued missile and shelling attacks, attempting to raise costs, to attempt to force the US to reconsider its presence and/or logistics routes.”

A recent Pentagon report claimed that Iran-backed militias have been coordinating with the PKK in order to attack Turkish troops in northern Iraq and in the last decade Iran has been a persistent chaotic and destabilizing force throughout the entire region.

In nearly a dozen countries, for nearly forty years, Iran has been active in sowing sectarianism, fomenting rebellion, creating and exacerbating ethnic division, funding and creating global terror networks and organizations and exporting its own brand of theocratic imperialism in the guise of an “Islamic Revolution.” Iran conducts proxy wars with its regional rivals, mainly Saudi Arabia, Israel and the US, in Iraq, Lebanon, Palestine, Syria, and Yemen. The US designated Iran as a state sponsor of terrorism since 1984. For four decades Iran has fostered a wide network of proxies, terror groups and client states throughout the middle east.

According to Al-Modon, a military source from Maghawir Al-Thawra, a US-backed opposition group in southern Syria, said, “Washington has already started holding meetings with Jordanian intelligence… in order to form groups supported by it to confront Iranian expansion on the Jordanian-Syrian border and combat ISIS, not to fight the Syrian regime,” the source mentioned the idea was proposed by Jordan due to the perceived Iranian threat on their border. Maghawir spokesman, Abu Hamdan told Al-Modon we cooperate with the coalition and Jordan to “combat drug lines run by Iran and Hezbollah” and as of late this is their top priority.

Hezbollah is Iran’s premiere organization, and while many refer to the group as “Lebanese” its allegiance is 100% Iranian. It was founded and backed by Iran since its inception and remains the primary means of projection of power for Iran outside of its borders. In control of many aspects of Lebanese life and politics Hezbollah is an example of the type of project Iran has tried to duplicate and export to other nations. Hezbollah is the main destabilizing force in Lebanon, and alongside the IRGC its most successful project to-date. Hezbollah is very active in Syria especially along the border regions.

Ali Akbar Farazi, a former Iranian ambassador, said, “a confrontation between Iran and Turkey is highly likely [in Syria], and such a confrontation would lead to clashes between the two countries’ troops.” Iran has come to see Turkey as one of its main rivals to influence in Iraq and Syria. The predominately Sunni nation with Turkic non-Persian roots is insulated against much of Iran’s normal tactics, while the two nations do share a rivalry with Saudi Arabia, Iran’s aggressive nature and penchant for destabilizing regions has made its opposition a common ground between Riyadh and Ankara.

Jason Brodsky, policy director of United Against a Nuclear Iran said, “Relations between Iran and Turkey have become increasingly strained on a number of files: Dam construction; Ankara’s warming relations with Israel; tensions with Iran-backed militias in Iraq; and now Russia’s shifting of resources from Syria to Ukraine will add further complications.”

Iran views Turkey, seat of the former Ottoman Caliphate, as a threat to its ascendancy in the region especially where Syria is concerned and the likelihood of the two coming to heads in Syria, either via proxies, or directly, is likely according to many.

Özdemir mentions that, “Idlib and Aleppo may become a conflict area between Ankara and Tehran. But a conflict with Israel is on the edge. IDF air strikes are a rising trend synchronously with rising presence of Iran. In the near future IDF may go beyond the air raids and intervene into Syria if Iranian presence becomes a direct threat to Israel’s security and foreign policy.”

Turkey faces Iranian threats not just at its borders and in Syria but also at home as well, Analyst Halid Abdurrahman spoke with L24, “Turkey is one of the most affected neighbors by this grand [Iranian] strategy. It has been rarely spoken but there are reports about Iran directly operating in Turkey with its client groups and persons.” as was evidenced in the recent plot by Iranian intelligence to assassinate Israeli tourists in Istanbul.

Finding a counterbalance for the Iranian threat

Syria is the main battleground for stopping the disruptive Iranian expansion, it is likely the last real battleground that Iran can be confronted in before completely solidifying its regional presence and influence. Many analysts and policy makers think it’s key to stop Iran from fully taking root in Syria before, like in Lebanon, it becomes too thoroughly entrenched to uproot.

Opposition forces already on the ground are most suited to counter Iranian efforts in Syria, direct confrontation by another country in Syria is unlikely, thus those experienced groups presently in Syria are best equipped to provide countermeasures. The question remains, who?

The predominately Kurdish SDF is a subsidiary of the YPG/PKK, an internationally sanctioned terrorist organization, making utilization troublesome as vital partners like Turkey would never accept this. Additionally, SDF themselves mention that they “don’t have the capacity to be a threat to [Iran] nor …  have the interest,” lastly its known that other PKK branches in Iraq coordinate and work with Iran in smuggling and transporting weapons and fighters and have been increasing economic and operational ties in the last few years.

This leaves the obvious candidate, the primarily Sunni Syrian opposition. Syria is a predominately Sunni country dominated and oppressed by a sectarian regime that has victimized the population for over a decade of conflict. Iran has been one of the longest financial and military backers of the Assad regime and implements an aggressive sectarian and racist anti-Sunni/Arab program. Iran has driven many tribes and Arabs (Sunni and otherwise) from their areas, displacing thousands and replacing them with Shiites, often Persian speaking, people in order to alter demographics.

Analyst, Guido Steinberg recommends, alongside sanctions that, “as part of [an Iranian] containment strategy, Europe and the USA should jointly support Iran’s opponents in Lebanon, Syria and Iraq so as to preempt a further gain in power by Tehran.” in the Syria arena the Syrian Arab opposition groups are the only groups currently in opposition to Iranian policy, forces, and expansion.

Iran poses a clear danger not only to the Middle East but the world at large, as analyst Halid Abdurrahman mentions, “Iran is pursuing an expansionist strategy from Western Sahara to Pakistan. Generally, their strategy is based on supporting the local groups. But sometimes, Iran can directly deploy their own forces and Shiite militias to some regions, just like in Syria.” Iran is ideologically opposed to the west and most of the established systems in the east as well, as evidenced by their hostility to the US, UK, Europe and even their own regional neighbors. Allowed unchecked, especially if achieving their nuclear ambitions, Iran can quickly become the greatest threat to global security.