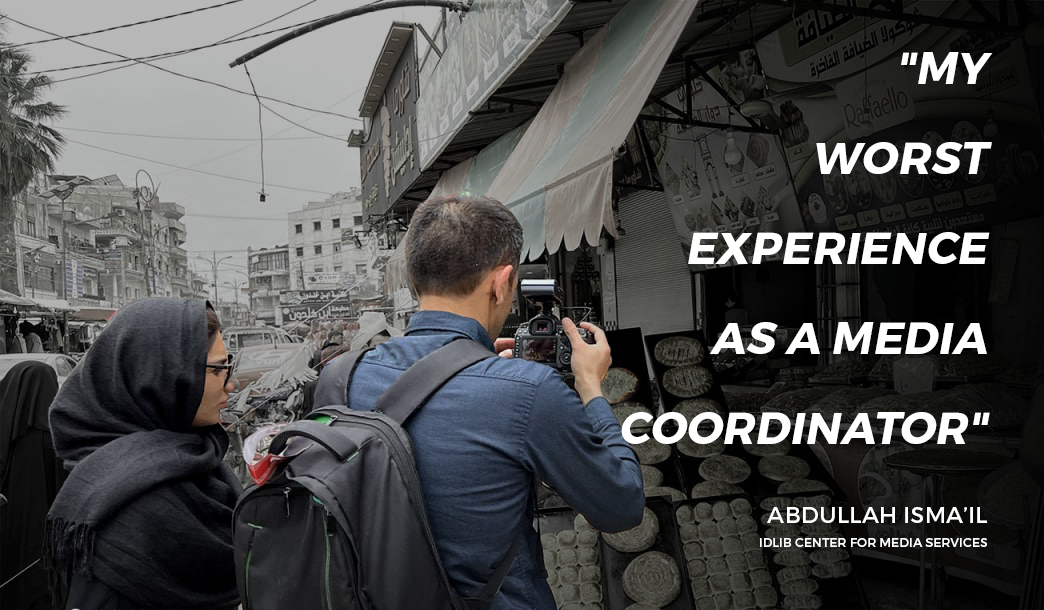 Written by Abdullah Isma’il, a field coordinator in Idlib Center for Media Services (ICMS). He organizes tours for journalists from international news agencies and accommodates their stay during their visit to the Idlib province.

A routine job, like any other. At least that’s what I thought. I usually receive the journalists who visit Idlib to report on the situation, familiarize them with the regulations on the ground, and ensure their safety and accommodation. Dozens of journalists from all over the world have already been here and their professional work always ensured good cooperation. Therefore, a routine job one would think. But the team of the Azerbaijani AZTV station was to prove me wrong.

But back to the beginning. We, the Idlib Media Center for services, were contacted to allow the Azerbaijani journalist team to do a report on the situation in Idlib. The team, headed by Vafa Agabalayeva as the front woman, arrived at the Turkish-Syrian border crossing Bab al Hawa, were received by us and were briefed on the behavioral guidelines. These were drawn up to respect the cultural realities of the country, to ensure a minimum level of competent journalism, and to ensure the safety of the journalists. After all, Idlib is still a war zone, and it goes without saying that we follow this responsibility.

They agreed to this in writing, as did everyone else before, and nothing really stood in the way of their work. Unfortunately, I soon realized that Vafa Agabalayeva was not willing to honor any agreements. Although there is an obviously strict ban on filming military facilities and checkpoints without prior permission, I caught her doing so secretly several times. I repeatedly pointed out this prohibition to Ms. Agabalayeva, but she seemed to ignore it. A situation with which I had not been confronted so far and whose motive I could not explain. What urgent interest could one have in filming a checkpoint, despite an explicit prohibition, other than espionage?

The majority of Syria consists of a Muslim conservative society. This includes the centuries-old religious, cultural and traditional headscarf, which is mostly known as the hijab. This tradition is firmly anchored and therefore we ask the female journalists visiting us to respect it and to wear appropriate clothing, as well as a symbolic headscarf. Journalists in particular are aware of the different cultural customs of different peoples and it is part of their professionalism to take these into consideration. Ms. Agabalayeva comes from Muslim Azerbaijan. She should know better. But it seemed to me that she tried to use every opportunity to trample these simple rules. I could not believe my eyes when she suddenly took off her headscarf in front of the whole team and stood with a T-shirt and tight trousers in front of the soldiers guarding the borderline with the Assad regime. It seemed more than absurd. Was this all done out of defiance?

Whatever. I did not want our work to be compromised by their behavior and so I fulfilled our part of the agreement, accompanied them to the end, allowed them to film and said goodbye after their “work” was finished. The whole thing had left a stale taste in my mouth, raised questions, but I quickly checked them off as we are busy with other teams almost every day and I considered their behaviors as a childish and negative exception, compared to my previous experiences. “Job done. It couldn’t get any worse,” or so I thought. How wrong I should have been.

When the report, under the title “Illusion”, by the Azerbaijani team was aired after a few weeks, my jaw dropped. The documentary, if you can call it that, was an accumulation of misinformation, lies and distortion of facts. Pictures were shown that were supposed to represent Idlib, but were not from here, rather from other countries, if only they fit the narrator’s narrative. Israel, Azerbaijan, and Turkey were shown and the viewer was supposed to believe that this was the pre-revolutionary Syria. Footage of the country’s destruction was then seen, suggesting that the revolution and revolutionaries were responsible, not the Assad regime with its fighter jets and infamous barrel bombs.

To list the distortions of the facts here would go too far. But so that the reader can get an idea, I want to mention them briefly. The documentary, if you could name it so, was riddled with translation errors. One cannot but wonder if they were intentional or not. After brief reflection on these “errors” you notice a trend. Topics discussed with civilians are: women’s education, child labor and terrorism. However, all of these subjects were horribly misinterpreted.

When interviewing a woman about women’s education she clearly states (in Arabic) that she doesn’t know the answer to the journalist’s question, the audio commentator however translated it to “women aren’t allowed to go to school” which is a blatant lie, both as a translation and regarding the reality on the ground. Several reports show that more than 60% of university students in Idlib are women. There are vocational training workshops to teach women, usually widows, so they can have an income. And this example is only one of many for the obvious distortion of the translations.

Additionally, Idlib is presented as a resting place of ISIS, although ISIS has been and is being fiercely fought here, and this terrorist organization has not been able to gain a square meter of foothold here. The revolutionaries are accused of the existence and sponsorship of child soldiers without even providing any proof. Basically, the Syrian people are shamelessly accused of having a propensity for terrorism. The list could go on forever. But to make it short: There is professional objective journalism, which thank God is the rule, and there is Vafa Agabalayeva’s contribution.

Now I am asked what the motivation for this misconduct was. To pin this down to one point becomes difficult. It would have been easy if the team had come from a country, friendly to the Assad regime. This accusation cannot be made against Azerbaijan. It seems much more obvious that Ms. Agabalayeva wanted to offer her viewers something spectacular and thus thought she had to resort to dishonest means. Unfortunately, this happened on the backs of the disgraced people of Syria.

The absence of any professionalism also seems to have been noticed by AZTV, for which the report was originally produced. According to NEWS24, an Azerbaijani news site, AZTV has terminated its cooperation with Ms. Agabalayeva.

The views expressed in this article are the author’s own and do not necessarily reflect Levant 24’s editorial stance.

“If outside aid stops, I will have to join a military faction.”

Why the Middle East is coming together against the common threat