The Syrian Democratic Forces (SDF), is a PKK-led coalition of various armed groups. While the PYD, YPG, and YPJ, comprising around 60% of the SDF, are PKK affiliates they do not share its FTO designation. L24 set out to look at the nature of the FTO designation and why some groups are considered “terrorists” while others are not.

Hakan Kıyıcı, PhD in International Relations and counter-terrorism specialist told L24, “This problem is related to the subjective nature of terrorism. There are cases where not only the PKK but also similar left-wing and far-right groups are not considered terrorists. For the PKK, this is a strategy, and even the new members of the organization do not know any other names, only knowing the PKK.” 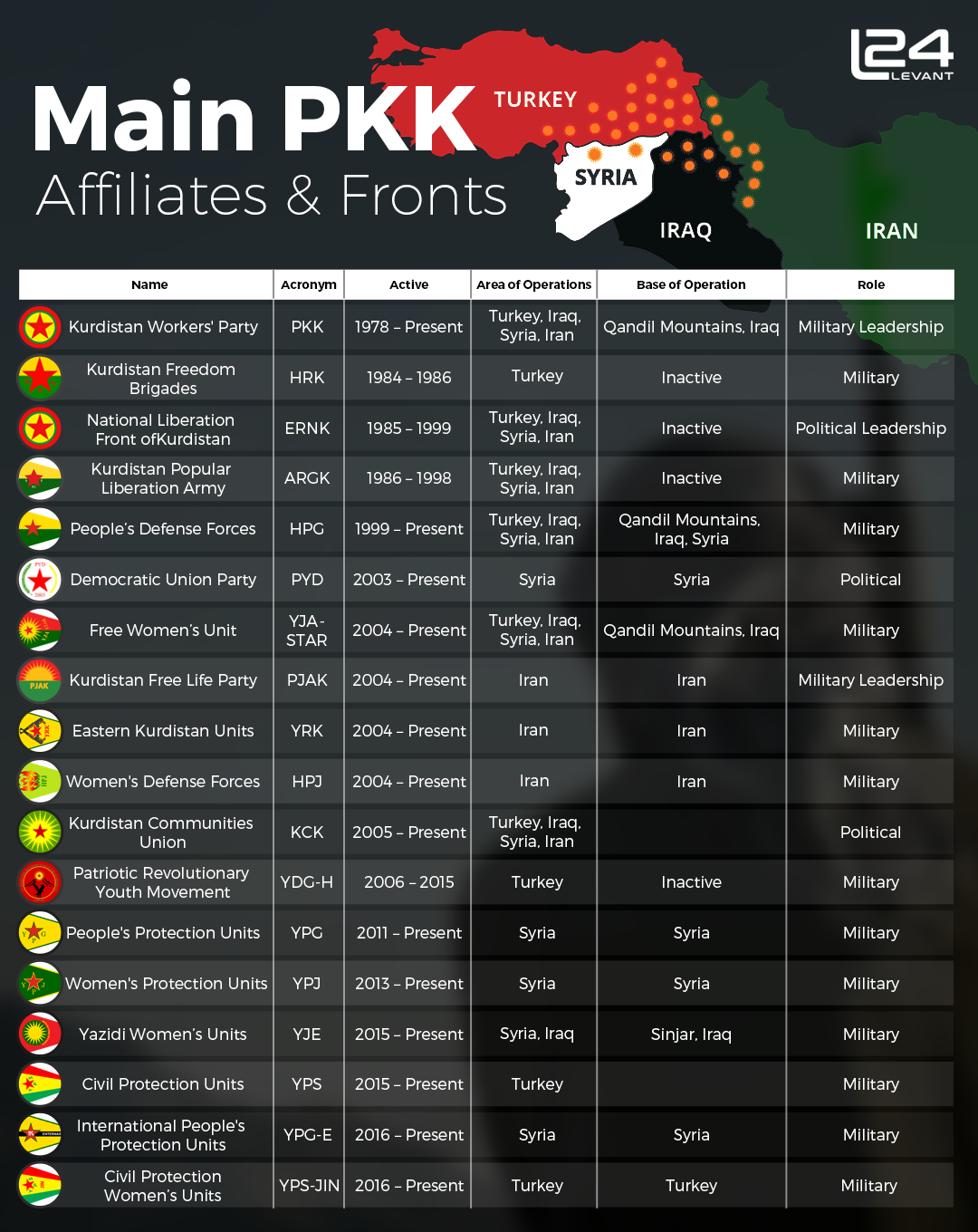 Many Names, One Face

The PKK is designated a terrorist organization by all NATO and EU members and 39 other countries. Evidence shows the PKK, PYD, YPG and YPJ are one organization, in a 2015 interview Zind Ruken, a “YPG fighter” from Iran, in Syria’s SDF, told the Wall Street Journal (WSJ), “It’s all PKK but different branches, sometimes I’m a PKK, sometimes I’m a PJAK, sometimes I’m a YPG. It doesn’t really matter. They’re all members of the PKK.”

When US Defense Secretary Ashton Carter was asked about the PYD and YPG, and if they were aligned to and had substantial ties with the PKK he said, “Yes.” he then continued, “the PKK is a terrorist organization.” Talat Silo, a former SDF spokesman said in a 2018 interview, “YPG and PYD get all their instructions from Sabri Ok (a PKK leader) in Qandil, (Iraq).” The question then is, why treat the SDF as if it has no ties to an FTO, despite evidence to the contrary?

When answering why the PKK and its branches are treated differently than other FTOs Mahmut Aytekin a researcher at Victoria University Melbourne writes, “according to [some] the PKK is not a terrorist organization for various reasons. The first is the PKK is seen fighting against the Islamic State in Syria (ISIS).”

There is also the promise of a secular democracy which many in the West identify with, Matt Bradley and Joe Parkinson wrote in the WSJ, “The PKK practices an offshoot of Marxism it calls Democratic Confederalism. It aims to create a Maoist-inspired agrarian society that opposes landowning classes, espouses gender equality, and distances itself from religion.”

And lastly, they are seen as promoting and defending women’s rights as Frederike Geerdink, a Dutch freelance journalist specializing in Kurdish affairs and movements told L24, “their (the PKK) struggle is really very, feminist, women are at the front of the organization and the struggle.”

Regarding these points Dr. Kıyıcı explains, “[The PKK] use expressions such as liberation, minority rights, exploitation of women and children to recruit staff and make propaganda. Yet, the ideology and narratives of the organization have a totalitarian character.” he further explained how this translated to their style of governance, “[they] don’t accept any alternatives, whether militarily or politically, so [their] character is both ideologically and institutionally oppressive and destructive.”

Kıyıcı is not alone in this observation, Carl Drott of the Carnegie Middle East Center writes, “In Syria, the US has backed an actor (SDF) that — for all its claims of Democratic Confederalism, is in practice not only separatist within Syria but harbors transnational designs.”

In an article for Anadolu Agency, Ömer Aslan quotes a high-level official in the Obama administration as referring to the SDF, YPG-controlled area as “a mini-totalitarian state” and Michiel Leezenberg, a Dutch expert on Islam and Kurds, puts it, the “Rojava (Northern Syria) laboratory has resulted in something very much resembling a Leninist one-party statelet.” Joost Hiltermann and Maria Fantappie wrote, “Whatever the [Syrians] think of the [SDF’s] ideology, they object to its exercise of power, which tolerates zero opposition.”

Does the PKK in Syria demonstrate shared values with the West in their conduct and policies? The Syrian Network for Human Rights (SNHR), whose statistics have been cited in UN and US State Department reports, shows the SDF is responsible for many violations against women, children, and the Syrian population. According to SNHR, between March 2011 and March 2021, the SDF abducted, disappeared, and tortured to death more Syrian civilians than any other group in Northern Syria.

Regarding children’s rights (which include those of young girls) the SNHR reports, “despite the YPG and YPJ signing a deed of commitment with Geneva Call in June 2014 to ban the use of children in wars, the recruitment operations did not end, on the contrary, they increased in an unprecedented level from previous years.” and a June 2020 report from the UN “confirmed that the SDF were the worst parties to the conflict in the recruitment of children.”

According to EUROPOL and the US, the PKK has a lengthy history of criminal enterprises covering money laundering, extortion, narcotics, and human trafficking. The drug trade has long been one of its most profitable, in addition to an FTO the PKK is also a specially designated narcotics trafficker.

Ümit Tetik and Kutluhan Görücü, SETA Foundation researchers specialized in the Syrian revolution wrote, “the PYD/YPG cultivates poppy [for heroin], marijuana, or cannabis in Syria,” the pair noted the main areas for narcotics cultivation in Syria are the lands near Julab and Khabur Rivers, and that drugs are planted in agricultural land and concealed with an innocuous crop like corn. The profitable trade, especially in heroin, earns the PKK up to $1.5 billion annually, a 2017 statement from the German Chief Public Prosecutor’s Office said “the PKK has seized control of 80% of drugs [trade] in Europe.”

While the PKK is most active in what it calls “Kurdistan” covering regions in Turkey, Iran, Iraq, and Syria, it is very much an international movement, Geerdink said, “the Kurdish struggle started in Kurdistan so it is in that part of the world, the Middle East, but it is eventually applicable to the whole world.”

Over nearly 12 years not a single opposition group of the Syrian revolution has launched terror attacks from Syria, except for the PKK. According to Turkish intelligence, both the Ankara and Bursa terror attacks carried out by the PKK in 2016 against Turkish civilians showed operational connections to SDF-administered areas in Syria, where the perpetrators reportedly received military training in YPG camps.

The recent September 2022 Mersin terror attack in Turkey, using two female suicide bombers, is also believed by Turkish authorities to have been planned and facilitated by Syrian PKK affiliates in SDF-controlled Manbij. The SDF, itself, even officially praised the two suicide bombers as martyrs holding events in Qamishli, honoring their “noble sacrifice” and celebrating their operation along with PKK iconography including images of the PKK’s leader and founder Öcalan.

There is a rising trend within the counter-terrorism specialist community advocating the abandonment of FTO designations as an effective means of enacting change and promoting security, CT analysts Jerome Drevon and Patrick Haenni, posit, “Listing groups is problematic. …it ultimately limits states’ ability to influence insurgents tempted by a change of trajectory as it constrains their capacity to engage …the possible consequences of non-engagement, in particular the risk of spill-over and the re-radicalization it might provoke, are implicitly ignored.”

Dr. Kiyici adds, “There is no ‘best’ and ‘most effective’ method in the fight against terrorism,” he explains states must utilize short, medium, and long-term strategies for achieving milestones and de-escalation and rehabilitation and dissolution of FTOs.

“The fight against the PKK, and similar groups,” he elaborates, “should not only be fought with military and intelligence administrations but also counter-ideological programs” He recommends, “civilian experts, other than security personnel, should be involved and programs and approaches should be put into action in coordination with various ministries.”

In such a fashion, of balanced engagement, FTOs in Syria can be utilized to achieve common goals for both the Syrian people and the international community, of which they are a part, as Drevon and Haenni mention, “normalization [with FTOs] should come at a price. Fait accompli and shared interests with Western states are not enough to justify engaging [‘terrorist’] groups. Western countries can also expect the respect of basic standards of human rights, inclusiveness, judiciary transparency, and non-interference in humanitarian affairs.”

The international community must ask itself why it stands in its way when it comes to pragmatic solutions for the Syrian conflict and does not cooperate with the local actors. It can hardly be about human rights, otherwise, this question would remain: If the PKK/SDF is not treated as an FTO, despite its record, then why deal with other Syrian groups with better records differently?