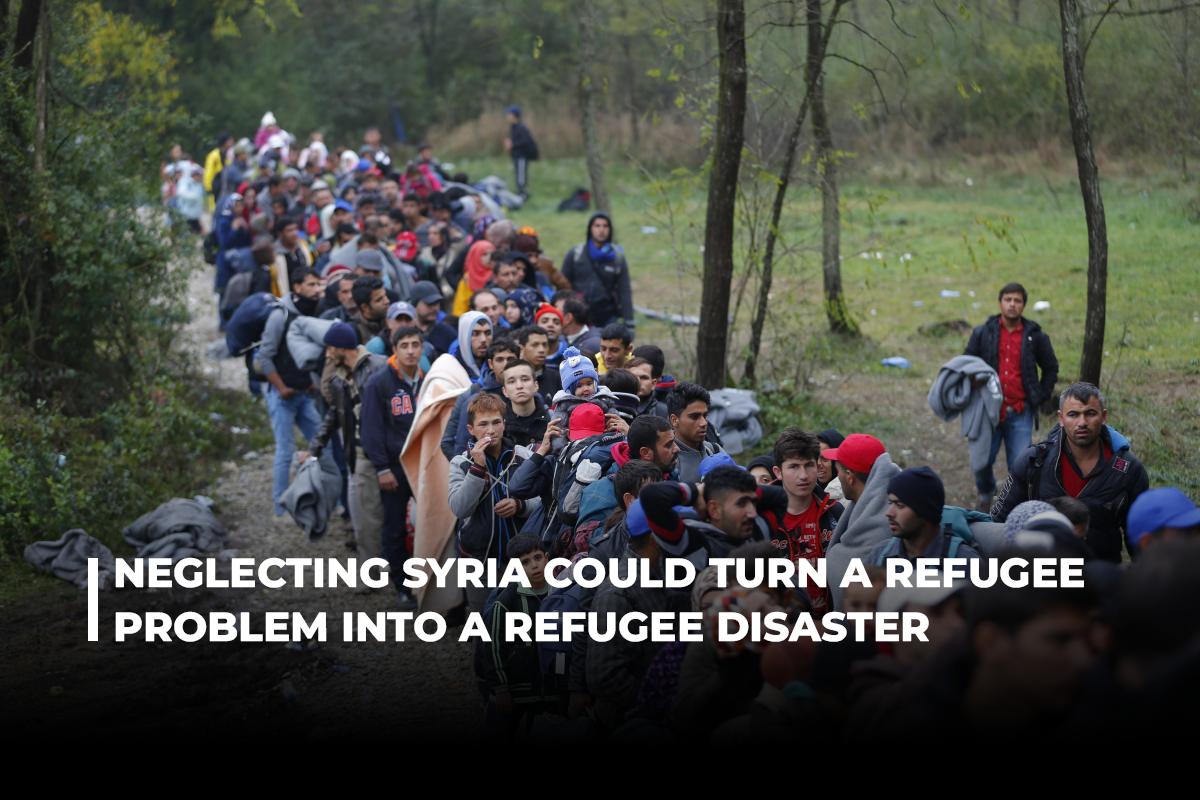 In early September a Telegram group to facilitate the mass exodus of Syrian refugees from Turkey toward the EU appeared. The “Caravan of Light” (COL) initiative quickly picked up traction via social media and word of mouth and currently has over 70,000 members. Yet why after being sheltered and hosted for nearly a decade in Turkey, would thousands of Syrian refugees risk their lives to once again pack up everything and leave?

Daily, Syrians flee from regime-held areas, whether to opposition-controlled areas or to the outside. The internally displaced would rather stay in squalid IDP camps or risk uncertainty outside than live under Assad where they face arrest, torture, or execution.

L24 spoke with Abu Ahmed, a Mathematics Professor, and graduate of Damascus University now living in Turkey who cited the reason for Syrians leaving as being due to, “the continuation of the criminal Assad regime and the insecurity of our lives in Syria, whether in the liberated areas or the regime’s areas.”

While security is the number one reason for fleeing, the economic conditions in Syria are dire with over 80% of the population living below the poverty line. Gross mismanagement and corruption in SDF and Syrian regime areas, as shortages of resources in the revolutionaries-held area, have led to the decline of the education and medical sectors, and a lack of sustainable income is among the leading factors, after safety, for people leaving.

Dutch researcher and journalist Rena Netjes said, “people are fleeing areas controlled by both the Assad regime and Kurdish-led, US-backed Syrian Democratic Forces (SDF) where the economic situation is even worse than in opposition-held areas.” Over a 16-month period, more than 46,000 Syrians fled both the regime and SDF-controlled areas for opposition areas and Turkey.

A Respite from War

Turkey hosts over six million registered refugees, more than any other country in the world. While the majority are Syrians, numbering around four million, Turkey also houses another two million refugees from Afghanistan, China, Iran, and Iraq. In roughly a decade Turkey has gone from a mostly homogeneous nation comprising over 80% Turks with a roughly 20% Kurdish minority to a country containing a seven percent refugee population, with Arabs being the second largest minority in the country after the Kurds.For nearly 10 years, Syrians found a place of safety, warmth, and welcome over its northern border in neighboring Turkey. Both the Turkish government and the people opened their hearts and homeland to their beleaguered southern neighbors. However, over the last few years, the sentiment in Turkey has dramatically changed with Syrians, with reports of them being attacked, robbed, assaulted, abused, and even murdered. So, what changed, what was the cause?

L24 spoke with Nermin Aydemir, a professor in the Department of International Relations at Turkey’s Antalya Bilim University, with a PhD in Political Science and Public Administration who specializes in Migration Politics, she said, “The economic crisis and the very high number of Syrians in the country are the most significant causes.”

The global pandemic, climate crisis, one of the largest refugee populations in the world, and a flagging economy and inflation all put pressure on the Turkish economy. According to reporting by Bloomberg Turkey has spent $100 billion on programs and services for Syrian refugees. There are nearly 2.5 million additional Syrian IDPs in Turkish-administered regions of Northern Syria, most of whom are dependent on Turkish aid for housing, hospitals, schools, bakeries, and mosques.

Between 2016-2024 the EU has pledged to provide $9.1 billion in refugee aid which is not nearly enough to meet the needs of the six million refugees in the ailing Turkish and global economy. This extreme economic pressure coupled with ultra-nationalist parties led to a systemic anti-refugee (de facto anti-Syrian) rhetoric.

As nationalist anti-immigrant parties formed and the issue of the refugees was weaponized a mass shift in the outlook of the Turkish public developed. The message was that Syrians took jobs, and therefore money, away from Turks, and lived off of social programs provided by the Turkish government. They were the cause of the failing Turkish economy and their removal would see the return of more prosperous times.

Sentiment led to the passing of increasingly restrictive laws meant to control and curb where Syrians could live, travel and work. Yaman Habbush, a Syrian university student in Turkey told L24, “In the beginning, there was a little racism and barriers between the Turkish and foreign people, but we gradually learned from them and integrated into Turkish society and began to adapt to living, but after every period of change and adaptation, we saw the government issuing decisions that would force us to adapt yet again.”

L24 had a chance to speak with the COL Media Committee about the worsening situation, “The difficult conditions began in the last two years when Syrians were restricted in terms of residence, laws, and the high cost of rent and living conditions. The deteriorating living conditions of Syrians, high prices, incitement of racist practices from some Turkish opposition parties, and the incidents of killing Syrian youth are all reasons for the desire to leave.”

Despite all this, the greatest fear among Syrians is the return to Assad held territories. The Turkish government may seek to normalize with Assad, which could result in millions of people who fled Assad being handed over to him. While there have been some indications of a possible rapprochement with Assad from Erdogan and his government, several opposition parties have explicitly stated that should they come to power they will fly to Damascus and put hand in hand with Assad and send all the Syrians back. This is likely the greatest motivator for Syrians seeking to flee Turkey for the EU, and why a Telegram group selling the hope of a better life in Europe gained over 50,000 followers in 48 hours.

Can millions of refugees who have spent the last five to ten years in Turkey now simply pack up and make a new life in Europe? Aydemir answered, “I regret to say it, but honestly speaking I don’t see a real chance that Syrian refugees will be accepted by the EU. [They’ve] already [adopted] the ‘Fortress Europe’ mentality since the 1990s.”

She went on to illustrate that not only would the EU likely not accept the refugees but that it was very unlikely Turkey would permit them to, “Turkey will act according to the EU interests in terms of stopping immigrants, especially Syrians, entering into Europe. Humanitarian concerns, unfortunately, do not play a decisive role.”

When asked about the prospect of leaving Turkey for the EU one of the Syrian refugees L24 spoke with, Habbush, said, “Life in Europe is certainly better than life in Syria or Turkey, but it is not an obtainable goal, because we all know that this convoy will not succeed, and it is a lie for the simple people [to give them] false hope for something that won’t happen.”

If Turkey and Europe are not viable places of refuge then what about simply returning the people back to Syria? Funnel resources into rebuilding the country, remove sanctions on Assad and his regime, and allow things to return to “normal?”

The Cause and not the Cure

Some seek a “quick fix” by promoting the concept of returning Syrians by “stabilizing” Syria through normalizing with Assad’s regime and their allies in hopes of creating an environment suitable for Syrians to return to. They are willfully ignorant to the fact that the Assad regime and its Russian and Iranian allies are the cause of the mass exodus and thus cannot be its remedy.

At the United Nations’ 77th General Assembly Qatar’s Emir Sheikh Tamim bin Hamad said, “We must pay attention to the roots of the issues before their impacts knock on the doors of our countries, soon enough, accompanying phenomena such as the refugee issues become the problems that we actually have to focus on.”

He continued by saying, “the Syrian case presents an important lesson regarding the consequences of the absence of a long-term vision from the active forces of the international community when it comes to addressing peoples’ suffering from absolute tyranny, extreme poverty, and civil wars before the ensuing repercussions, such as asylum, become the problem that needs to be resolved.”

Ibrahim Karatas, PhD in International Relations says, “It is obvious that as long as the Russian and Iranian-backed Assad regime is still in power, the displaced Syrian people won’t return. If Turkey is no longer safe, Western European countries will be their new destination.”

According to many analysts, normalization will only lead to a greater exodus, as Assad and his regime are the root cause of the evils the people flee. So, what is the solution?

The truth is there is no simple “one size fits all” solution for such a complex issue. However, by addressing the situation holistically what presents itself as a series of policies that takes the following realities into account: Firstly, Assad’s regime and his Russian and Iranian backers are the cause of the refugee crisis and there can be no viable and lasting solution while they remain.

Secondly, the complete rapid removal of nearly six million people is not practical, especially without the physical instruction nor the governmental and social mechanisms in place to receive them. Mass resettlement of Syrians from Turkey to Syria cannot be implemented quickly without the proper infrastructure like homes, utilities, medical and educational facilities, and the social and governmental mechanisms to facilitate aid and economic frameworks which promote self-sustainability.

Merve Tahiroglu writes in Immigration Politics: Refugees in Turkey and the 2023 Elections, “Refugees in Turkey are there to stay. Rather than pretending that a short-term plan for mass resettlement is realistic, Turkey’s political leaders must recognize this reality and devise integration policies.”

Thus, according to such analysts, both a long-term resettlement plan and an attempt at true integration should be implemented to alleviate the issues between the native Turkish population and refugee communities in the interim.

For these programs to be implemented there must be sincere political and fiscal support from the West, EU, and wealthy nations, as Ibrahim Karatas states, “If the EU doesn’t contribute to plans prepared for the future of Syrian migrants, it will have another, but this time bigger, migrant problem. [It] should focus on the source of the problem (the Assad regime) and solve it in its origin (Syria). How the migration problem hurt Turkey in the last decade and Europe between 2013 and 2015 should be a lesson learned and compel European leaders to act fast. Otherwise, the new wave of refugees may shake the continent worse than before.”