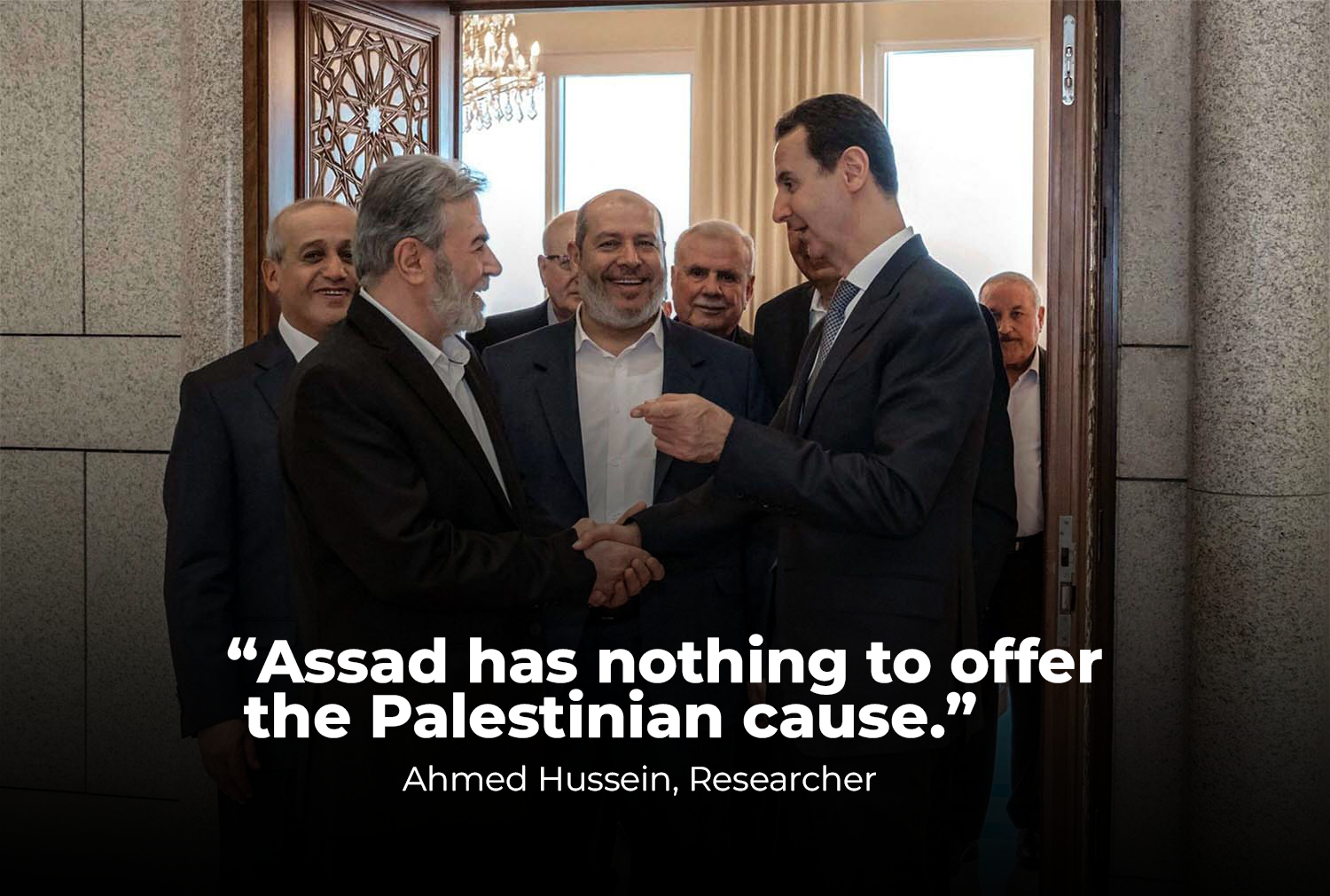 Friday, February 2012, a year into the Syrian revolution. Hamas leader Ismail Haniyeh stood before supporters at Egypt’s Azhar Mosque, “I salute all the nations of the Arab Spring and the heroic people of Syria,” he said to the massive crowds after Friday prayers, “people striving for freedom, democracy, and reform!” After years of Assad and Iranian support, Hamas was shifting its allegiances.

The crowds chanted, “We’re marching towards Syria, with millions of martyrs! No Hezbollah, no Iran! The Syrian revolution is an Arab revolution,” sending a strong message to Iran, Assad and the world, Hamas was an Arab Sunni movement. In a synchronous rally in Gaza, the party’s leaders made a promise to crowds of Palestinians, “no political considerations will make us turn a blind eye to what is happening on the soil of Syria.”

Now, a decade later, Hamas has announced their rapprochement with the same regime they had previously rejected, claiming the decision was to “serve the interests of the Arab and Islamic Ummah, especially the Palestinian cause.” What led Hamas’ leadership to return to the bosom of Tehran and Damascus, and what impact might this truly have for Hamas, Palestinians, and the Palestinian cause? 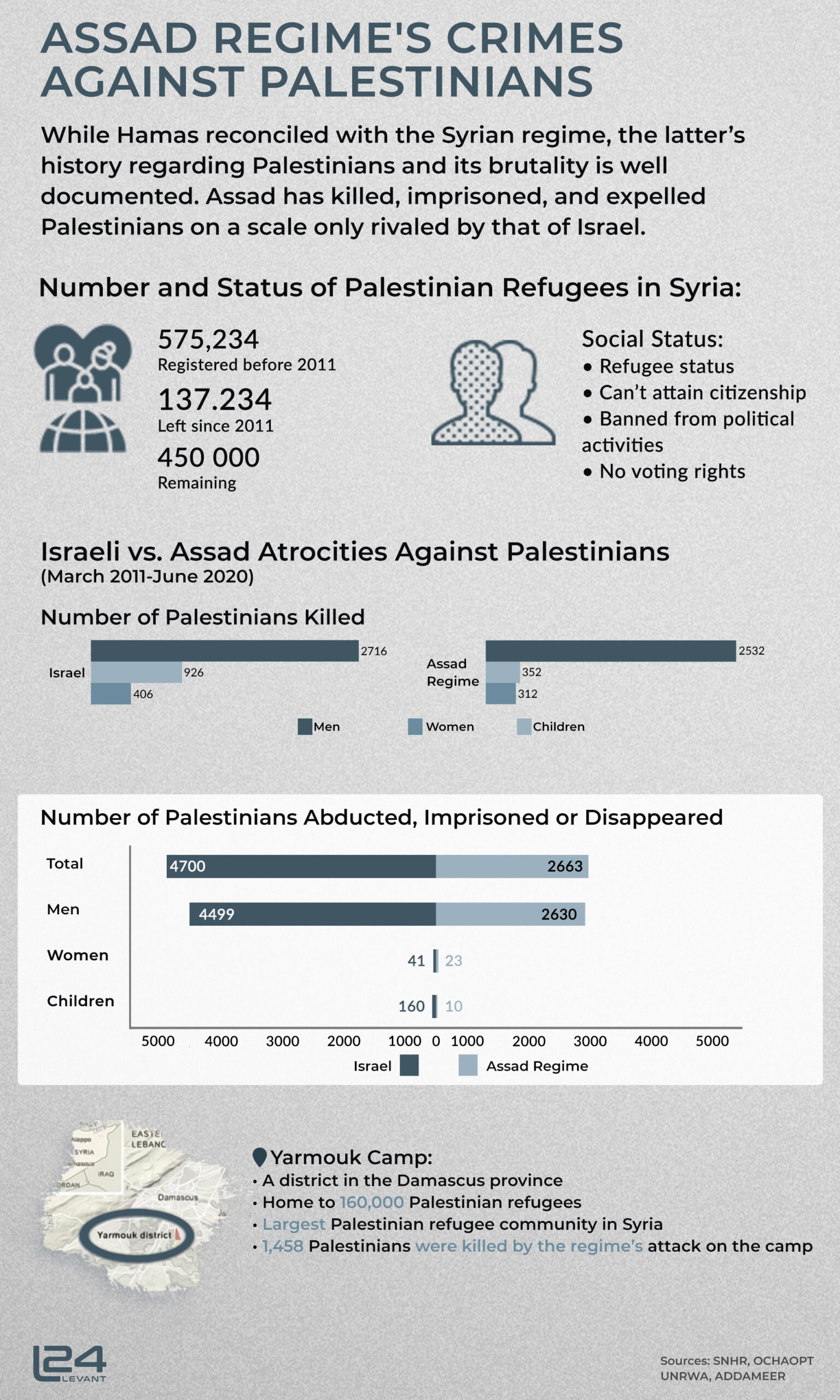 L24 spoke with two Palestinian specialists, political researcher and author, Ahmad Quneita and journalist Ahmad Al-Maqadema to try to uncover the reasoning behind this shift in policy and the seeming reversal of the party’s pledge of commitment to the struggle of the Syrian people.

Quneita explains there are two major factors for the decision, Arab-Israeli normalization and Arab-Assad normalization, “Hamas joins with the Iranians in confronting the Zionist entity (Israel) and in enmity with it, this is on the one hand, and on the other hand, Hamas sees, and this was stated by some of its leaders, that most Arab regimes are heading towards normalization in their relations with the Assad regime.”

Al-Maqadema agreed saying, “there is a real danger facing the Palestinian cause in light of the wave of normalization. Hamas is seeking to strengthen its alliance with the opposing movement (Iran) to confront the campaign of elimination that the cause is facing.”

According to the two it’s clear that Arab-Israeli normalization has left Hamas little allies, and while the group had previously had alternatives to Iran in Turkey, Qatar and Egypt, the recent initiatives of Arab, especially Gulf countries, to normalize with Israel, as well as a simultaneous movement to normalize with Assad has caused Hamas to see rapprochement with Assad not only as moving in step with the rest of Arab states, but as a return to the only remaining anti-Israeli axis.

Following Hamas’ announcement, there was a general outcry among many Arab and Palestinian pundits both in Palestine and abroad, criticizing the decision and the group. Accepting that Hamas finds normalization to be advantageous or at best a “necessary evil” doesn’t give full weight to the perspective of the popular opinion among the people regarding the return to the Assad regime.

This is congruous with numerous surveys and interviews within Gaza and the occupied territories, showing that the majority of Palestinians sympathize with the Syrian people and are in opposition to the Assad regime. Many Palestinians mentioned feeling parallels between the crimes that Assad and his Iranian and Russian allies commit against the Syrians and those the Israelis wage.

Yet Palestinian journalist Al-Maqadema offers an alternate perspective on the matter, saying this choice is representative of the Palestinians’ will, “because of the general interest in their cause, as Syria (and the regime) has a great strategic role in supporting the Palestinian cause. …the military solution did not succeed, the popular marches did not succeed, and the revolution did not remain as it was, so reconciliation is the best solution as long as there is no clear political and revolutionary horizon.”

In terms of the Islamic outlook, the International Union of Muslim Scholars (IUMS) warned Hamas against normalization in a statement saying, “the decision contradicts principles, values, and Islamic law, and needs to be reviewed by taking into consideration the points raised by the Muslim scholars,” and closed by stating that “the scholars are waiting for [Hamas] to carry out the legitimate duty that is appropriate to the situation … and in the interest of the cause of Palestine, which is the cause of all Muslims.”

It is not only the general public and Islamic scholars that object to the choice, as many close to Hamas have stated, but party members also are not all in agreement, with many left unhappy at the direction the group has officially taken. Khalil Jahshan, Executive Director of the Arab Center Washington DC elaborates, “The leadership is divided. The military grouping (within Hamas) that is closer to Iran is becoming stronger.” This internal power struggle and the ascendency of pro-Iranian factions within the movement has resulted in the recent impetus to normalize, as a means of coming closer to Iran.

Despite this internal discord, it is unlikely to hear many from within the group speak out as Quneita stated, “there is no consensus inside the organizational rank of the movement, but rather there is a disagreement about this decision, … [but] when a decision is made, the supporter and the objector accept it and remain silent about it, even if they disagree, this is the nature of political work.”

Similar to that Friday in Egypt nearly a decade ago the rhetoric seems to be sending a clear message, but what will the future hold and will this relationship bear beneficial or poisoned fruit for Hamas and the Palestinian cause?

Quneita doesn’t believe much other than simple diplomatic ties will come of this process, saying, “this decision doesn’t provide any real benefit to the Palestinian people, the normalization will not go beyond the official normalization of restored relations“, he elaborates, explaining that the Assad regime is not really in control of Syria as it once was, “firstly, the decision is in the hands of the Russian occupation, and then the Iranian occupation.”

He mentioned that Russia and Israel coordinate regarding Israeli airstrikes in Syria, against Iranian assets, thus, he posits, how much actual support can Syria or Iran hope to offer Hamas, against Israel given the present dynamic.

However, Assad hopes to raise his own political prestige in the bargain, showing that more and more of the world must return to recognition of his legitimacy and giving his regime a veneer of relevancy in terms of Palestinian issues, which are still very important to the people in most Arab and Muslim majority countries.

Aron Lund, a Middle East researcher at the Swedish Defense Research Agency (FOI) mentioned, “[normalization] could help Assad restore his tarnished image by representing him as a defender of the Palestinian cause, despite the fact that his army destroyed the Palestinian refugee camps during the war.”

In closing, Quneita succinctly said, “I do not see that the return of relations will provide great services to the Palestinian cause, and this is according to what we know from the data we have, but the leadership has its own assessments and its own information that we don’t know. The coming days will prove or deny the extent of the interest resulting from the return of relations with the Syrian regime.”

L24 reached out to several Hamas representatives and members but all declined to respond or comment.