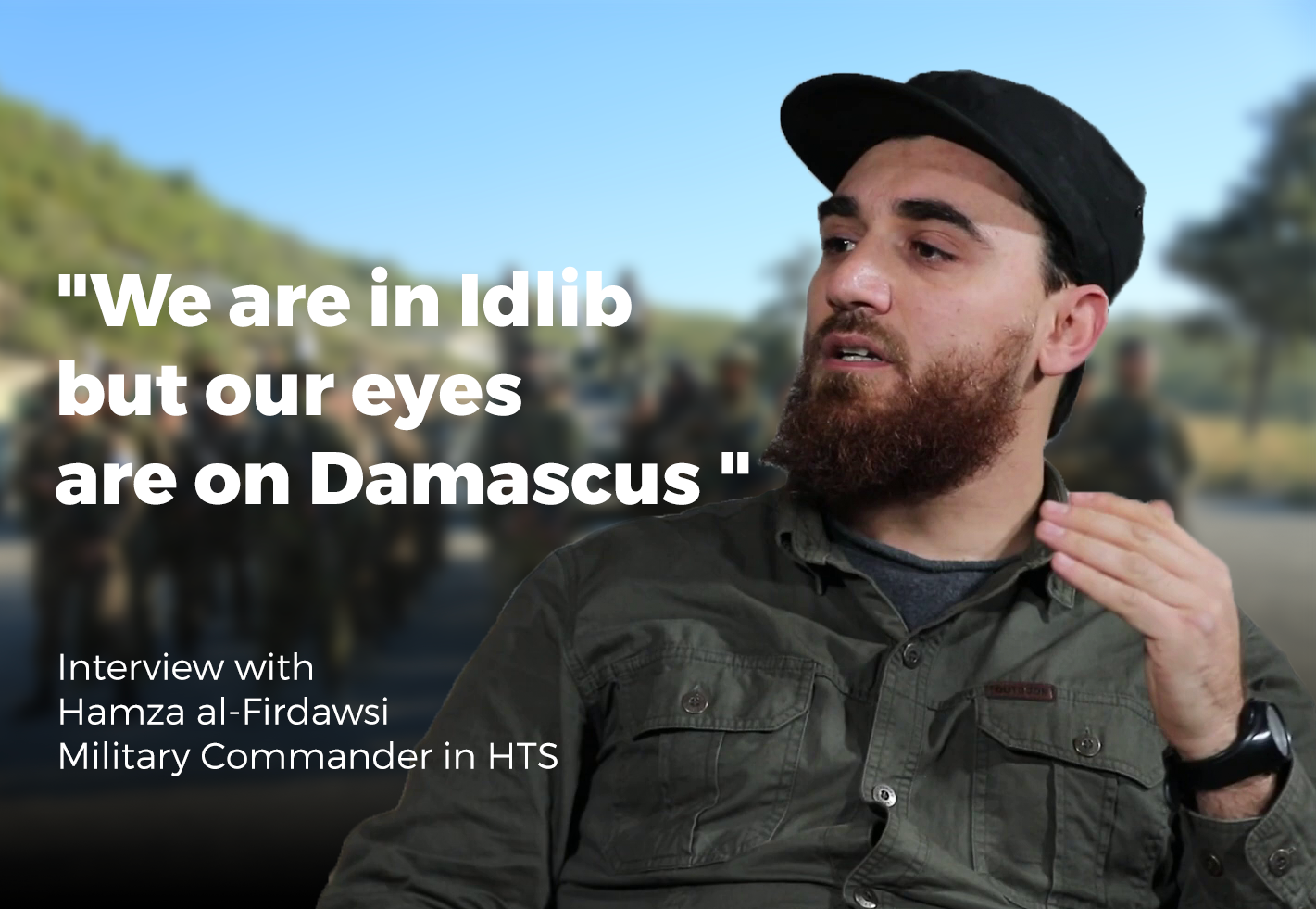 While the topic of normalization with the Assad regime has dominated headlines in recent months, the Syrian regime’s front lines have witnessed a surge of small-scale operations by HTS and allies. An escalation of these types of attacks in recent weeks have raised many questions by stakeholders, both inside and outside Syria. L24 spoke to a HTS military commander Hamza al-Firdawsi to find out what these operations are about and what the general military situation is.

L24: In recent months, there have been several operations against the regime. Could you tell us who was behind these attacks?

Hamza al-Firdawsi: All praise is due to Allah and peace and blessings be upon His Messenger. In fact, 14 successful operations have taken place in the last two months. Of these, 12 by our fighters from HTS and two by Ahrar al-Sham and Ansar Tawheed. The areas where these operations took place were along the entire front: Latakia, Idlib and Aleppo. In the process, by the Grace of Allah, over more than 30 enemy soldiers were eliminated with dozens more wounded, while we had only two martyrs (deaths).

L24: What kind of operations were they, and what were you trying to achieve?

Hamza al-Firdawsi: These operations are what we call hit-and-run operations. They involve small units that have gone through special training, using light armaments for easy maneuvering. The main targets were guard posts of the regime and its allied Iranian militias. Each fighter, in coordination with the team, has their task in storming these points. Sometimes we circumnavigate them to prevent any resupply. After eliminating these militias, before retreating, we destroy their bases to render them useless. The fog this time of the year has helped us a lot in completing our missions.

Of the goals of these missions are to test the enemy’s defensive capability, increase combat readiness of our forces – who have undergone intensive offensive training in the last few years – which will prepare them for larger operations in the future. Additionally, we send a clear message throughout our actions that we can strike effectively whenever and wherever we choose. You can also interpret these operations as a means to respond to bombing campaigns that target our people in the Liberated Areas.

L24: Why now in particular? Is this to be understood as a reaction to Turkey’s rapprochement with the regime?

Hamza al-Firdawsi: The world has seen the reaction of the Syrian people to these initiatives. All layers of society have taken to the streets and rejected any kind rapprochement with the regime. These military operations have shown our people once again that we will never deviate from the goals of the revolution and that a rapprochement with the criminal regime of Assad will never take place.

L24: What challenges does the military have to overcome in order to perform its duties and achieve its goals?

Hamza al-Firdawsi: It is clear to everyone that this is not a normal situation. We are facing a regular army that has been militarily supported by Russia for years. We must not forget how Iran and its militias support this regime. The Ukraine war may have raised awareness among the public in the sort of destruction they are capable of. In our last battles, we had to learn this bitterly. Accordingly, we have learned, adapted and prepared.

At the moment our challenges are of a completely different nature. People are tired of living in camps or in exile. They want to liberate their homeland and return to their villages and towns. Every month, there are many who want to join our ranks. After these successful operations, we are experiencing an increase in such interest. Syrians internally and abroad are returning to join the revolutionary ranks. We can only partially cope with this major inflow. On the other hand, it helps us to be more selective in our choice of fighters.

L24: Given the situation and the various difficulties facing the Syrian people and the military, how capable do you feel the military is in defending the people and territories?

Hamza al-Firdawsi: I can only speak about this subject in a limited way. I can only say that enormous efforts have been made and they have paid off. To cite just a few examples: The number of personnel in the armed forces has grown immensely. What is much more important, however, is that effectiveness has been improved through intensive and constant training.

Additionally, the command structure of the units has been unified, our weapons development has progressed, and the defensive lines have been greatly strengthened. However, what we have focused on most of last year, and this is a glad tiding to our steadfast people, is the expansion of our offensive capabilities.

On one hand the military situation in the liberated areas is constantly evolving, on the other hand, we see the regime’s military declining and clearly deteriorating. Their morale is low. The economic situation in the regime-occupied areas is dramatic, and this is also felt in the ranks of the army. This also explains how quickly they flee when clashes occur.

As for us, certain mistakes that happened in the past have been analyzed to avoid them in the future. We are preparing ourselves for the upcoming battles of liberation, Allah willing. As for our defenses: since November, the regime has tried to invade us about 10 times and failed miserably and all praise is due to Allah.

Hamza al-Firdawsi: Again, because of operational security I can’t talk about that specifically, but in general terms the factions are gathered under the Fath al-Mubin Operations Room (FMOR), all coordination between the factions takes place within the framework of this FMOR. The Liberated Areas have been partitioned into several main fronts and axes, all linked to the centralized FMOR.

L24: Does the military have adequate resources for the responsibilities it bears and how does it deal with expenses for equipment and personnel, is there a fixed budget or a regular source of revenue?

Hamza al-Firdawsi: The responsibilities entrusted to the military require huge financial resources, manufacturing of weapons and financing ammunition take the lion’s share of the budget. The Liberated areas’ resources are well managed with the military given priority in all matters. We work with what is available and make sure that no penny wasted.

Hamza al-Firdawsi: Assad’s militias are at their weakest today, especially with their Russian supporters’ preoccupation in the Ukraine war and the Iranians experiencing internal turmoil and protests against the ruling government. The regime will not be able to launch any offensive operations, rather, they are the ones fearing an offensive attack by our military forces.

L24: Are there any long-term plans regarding the development of the military or various operations or goals?

Hamza al-Firdawsi: There is no doubt that strategies have been planned to be implemented in the future, all it needs is time and necessary capabilities. We will not remain confined, we are in Idlib but our eyes are on Damascus and we will reach it, Allah willing.