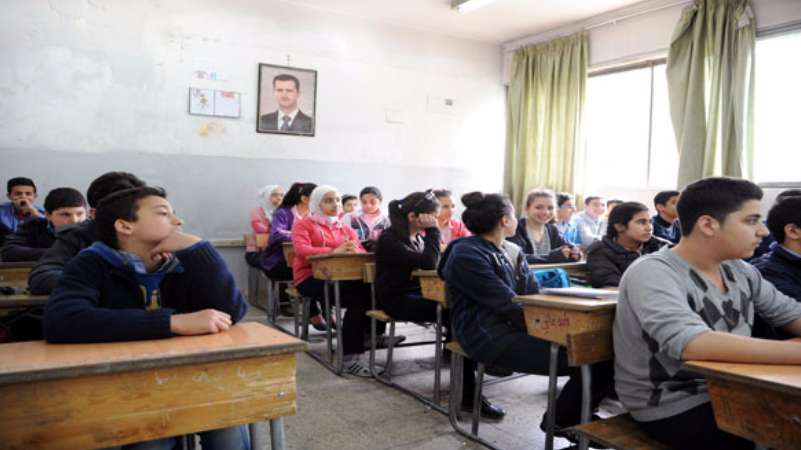 Recently, the Assad regime introduced a new course in the schools aiming to distort and mislead the younger generation regarding the Syrian revolution.

Syria TV published an article by Syrian activist, Yahya al-Aridi, in which he talks about the Assad regime’s approval of a course called “The War on Syria,” to obliterate the facts and portray the revolutionaries, and those with them, as the executioners and villains while representing the regime as the victim.

He added that the book aims to shed light on what the regime calls the cosmic conspiracy against Syria, without mentioning the hundreds of thousands of airstrikes, missiles and barrel bombs that the regime and its allies dropped on the civilians and their homes.

According to al-Aridi, this curriculum is not supposed to mention how the security and intelligence of the regime confronted the peaceful revolution in 2011 aggressively using weapons, and detained hundreds of thousands of civilians, where many of them died under torture.

He further mentioned that this course intends to portray Iran as a brotherly state and an ally of the Syrian people. At the same time it would depict the Syrian revolution in the image of murderous terrorists, who destroyed and ruined the country. It will also portray Russia as the savior of Syria and its people from the clutches of conspiracy and terrorists. Meanwhile countries like Turkey and Saudi Arabia are to be delineated negatively such as ones against the Syrians.

Recently, there were many reports that the Assad regime has been exerting all its efforts to distort the image of the Syrian revolution through various means, while making themselves look like the “real heroes” who are defending the nation.