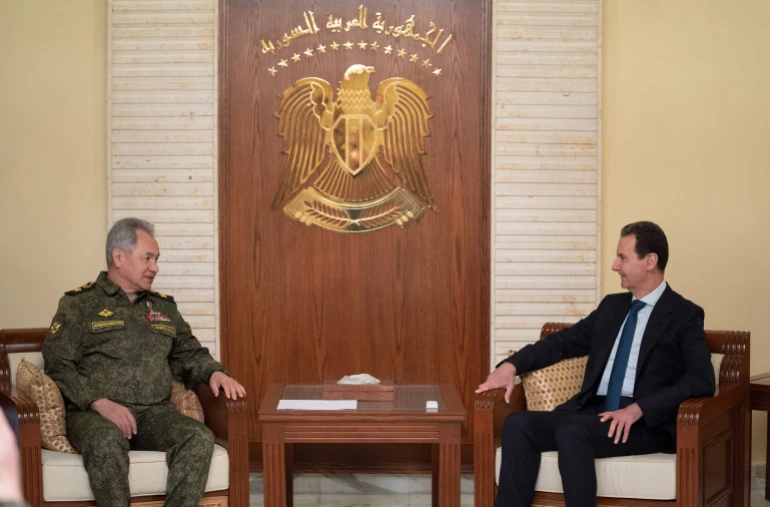 On Tuesday, Russian Defense Minister, Sergei Shoigu, visited the Syrian Capital where he discussed with Bashar al-Assad about the cooperation between the Russian and Syrian forces, particularly on the issue of counter-terrorism.

The Russian Defense Ministry mentioned in a statement that various issues of military and technical cooperation between the two countries were discussed.

However, according to well informed sources for al-Watan agency , the Russian DM’s visit to Damascus were deeply related to the escalating situation in Ukraine and how it is linked to the Syrian fronts.

According to analysts, the Hmeimim base, in the Syrian coast, has become vital in the clash between Moscow and NATO, especially after deploying MiG-31K fighters, Kinzal hyper sonic missiles and Tupolov Tu-22M long-range strategic bombers.

Added to that, Sergei Shoigu himself is to supervise the largest Russian military exercises there amid NATO naval exercises in the Mediterranean.

Meanwhile, it was reported by al-Baath agency, that Shoigu’s visit to Hmeimim came after Moscow rejected an offer from Washington to swap Syria for Ukraine.

The situation likely opens the door to swaps between Russia and America and there is no doubt that this is what the Assad regime’s Foreign Minister Faisal Miqdad will try to see during his visit to Moscow next Monday, according to al-Sharq al-Wasat.