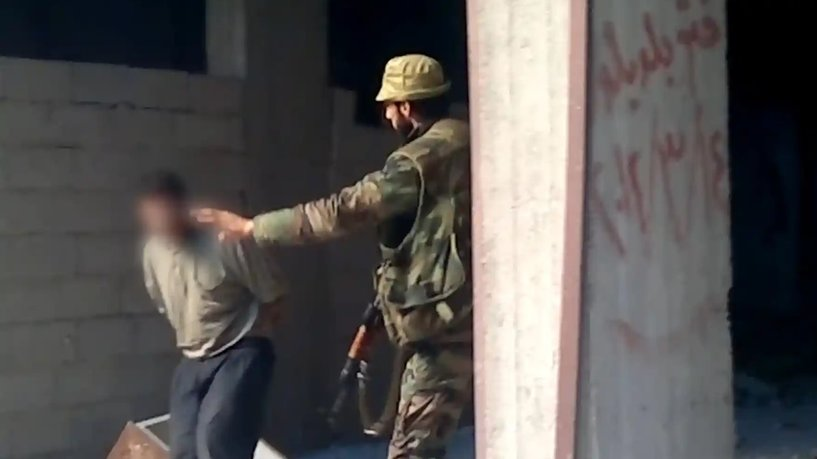 Since The Guardian published the video a few days ago, showcasing massacres by the Syrian regime, it caused worldwide criticism from many while others expressed how helpless the case is due to world’s silence on punishing Assad for such crimes.

Feeling hopeless has become prevalent among most, mainly because of the way the international community dealt with dozens of files regarding violations that were documented with images and testimonies.

The massacre that took place in 2013, revealed by the Guardian’s investigation with images and the names and faces of the perpetrators, is the latest documentation related to the violations committed by the regime forces against the opposition, as well as civilians, in Syria.

The Syrian Network for Human Rights, has documented many of these violations and crimes over the past years, to the extent that it has become a reference for a number of international human rights organizations.

The betrayal expressed by Syrians, opposed to the regime, for years has rather reduced the impact of any violation revealed, whether at the political or judicial level, which is now confined mainly to European countries, such as Germany and others.

Director at the Syrian Network for Human Rights, Abdel-Ghani, explained this in an interview with al-Hurra agency: “We do not want to reach political nihilism and passive nihilism. Achieving the solidarity massacre is of a high level of importance”.

The Syrian human rights defender believes that “to achieve something in the political level is more important than the judicial level”, considering that the judicial process is limited.

The Syrian human rights defender adds that the disclosure of the massacre will also constitute “a political embarrassment’ for anyone that reaches out to shake hands with the head of the regime, Bashar al-Assad”.

According to the newspaper’s investigation, prepared by researchers Ansar Shahoud and Ugur Umit Ungor, who work at the Center for the Holocaust and Genocide at the University of Amsterdam, the main perpetrator of the massacre in the Tadamon neighborhood in 2013 was the regime’s intelligence agent, Amjad Yusef.

After 2011, Youssef was employed as a non-commissioned officer, an investigator, in the District Branch or Branch 227, which is a branch of Military Security, the Military Intelligence Division.

The video showed how Youssef was taking people, blindfolded and handcuffed, to the brink of a pit and then pushing them to it and shooting them in the heads and all over the bodies.

A spokesman for the US State Department mentioned that the United States was committed to holding the regime accountable for the atrocities it committed against its people.

He added that the ministry commends the efforts of those who work to bring Assad and his regime to justice and often put their lives at risk.

“Without accountability, there can be no lasting solution to the conflict. We support the important role of the investigation committee and the international, impartial and independent mechanism. Moreover, we welcome the continued efforts of national courts to investigate and prosecute crimes within their jurisdiction committed in Syria,” he said.