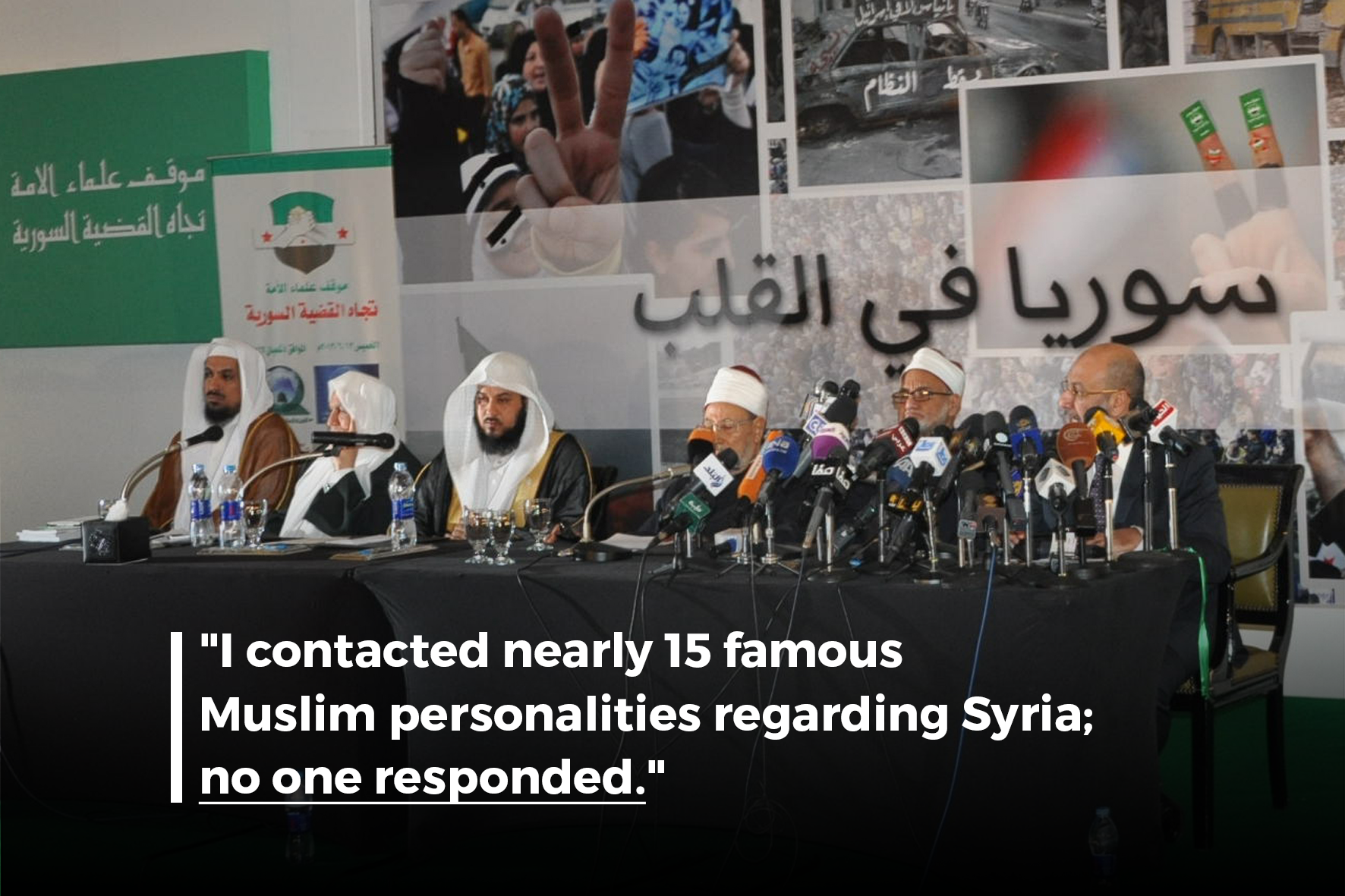 The prayer pulpits (manabir) shook. The call to support Syria was on everyone’s lips. No, it went further. Muslims were urged in tearful voices to do everything in their power to come to the aid of Sham, as Syria is also called in Islamic literature. “Our hearts are with you. Our possessions are with you. And with Allah’s permission, our weapons will soon be with you too,” was the promise of Muhammad Arifi, a Saudi preacher, for example. A wave of solidarity, hardly unparalleled, swept through the Muslim world. But then … What happened? Events spilled over and slowly but surely almost all support came to a halt.

As for me: I’m Syrian. I’m a Muslim and I’m a journalist. This combination obliges me more than others to report on my homeland and bring attention to the terrible events my country has been suffering for over 10 years. It’s important that the international community doesn’t look away and doesn’t abandon the Syrian people. It’s all the more a moral obligation for Muslims to give their Syrian brothers in faith all the help they can in the fight against the dictator Assad. It saddens me every time I see aid organizations from different countries like Ireland, France, even from far away South Africa supporting different projects like hospitals, whereby it has to be mentioned that this is also dwindling, but the help from Muslims has more or less dried up.

In the first years of the revolution, as I said, there was no need for such an appeal. What had happened? Why this silence after the euphoria of the first years? Had the situation of the Syrians changed for the better, so that help was no longer needed? I wanted to get to the bottom of these and other questions. So, I started my research and sent the questions out to various Muslim figures around the world. In doing so, I tried to keep a balance of consulting both English and Arabic speaking Muslims. This is part of my job and the beginning of every article.

This time, however, the response was startling. It simply failed to materialize. This is despite the fact that I wrote to almost fifteen well-known scholars, preachers and activists who are, until now, involved in other places in the world. To learn the names of these people would astonish many. To a certain extent, I can still understand that interest has waned among ordinary Muslims due to the lack of coverage and other factors.

Yet the fact that these world-renowned Muslim personalities expressed their disinterest with silence was shocking to me. The most polite of them excused themselves by saying that, as a matter of principle, they would not give interviews “on such subjects.” The absolute majority simply did not react. My work came to a halt. Although I was aware of the development, I had not expected this lack of interest. In the coming days it dawned on me that the reasons were deeper than one thought.

The revolution experienced internal struggles, but above all the emergence of the bloodthirsty terrorist organization ISIS, confused many formerly ardent supporters of the Syrian resistance. People have been downright put off. The easiest solution was to simply forget about Syria. The revolution is considered dead. First ISIS, then Assad’s takeover, with the help of Russia and Iran, of Syria’s biggest cities, such as Aleppo and Homs. However, the reality on the ground is different, even if it is difficult to perceive from the outside. There is no question that the resistance has suffered major setbacks. But this is only half the truth. At the same time, it has rallied and to a large extent united and organized its ranks. Idlib is currently developing fast, despite all the financial adversities. The liberated areas are controlled by a single government that facilitates people’s affairs. All fighters are now under the control of a single operations room and military preparations are going ahead without interruption. The revolution has proven that it not only wants to remove Assad and his tyranny, but is capable of offering an alternative order.

Revolutions are turbulent and dynamic. Revolutions take time. The French Revolution officially took 10 years. In fact, it could be said to have taken around 20 years until the dust settled and a stable republic emerged. Today, we live in a so-called “global village,” where global interests are even more interconnected and make developments even more complicated.

How can one expect deep-rooted dictatorships to dissolve overnight? Considering how many actors there are in Syria, one has to be prepared for an even longer development. Apart from the Assad regime, Iran, Turkey, Israel, extremists of all stripes, whether ISIS or PKK, as well as NATO, all have their own interests in Syria. And that is by no means the end of the list. Ever since the terror label has been hanging over our homeland, everyone is turning away as if the plague has broken out.

Yet Syria is far too important to be abandoned. Did not the Prophet ﷺ announce that “If the people of Syria are corrupted, there will be no good in you. A group among my nation will continue to be supported, unharmed by those who fail them until the establishment of the Hour.” How then can one allow corruption to gain the upper hand in Syria and not be one of the supporters of the Syrian people? And: “..The Muslim is a brother of a Muslim. He does not oppress him, nor does he abandon him…” It is clear that neither state reprisals, nor stigmas should prevent a Muslim from supporting his brothers and sisters in a legal way.

What can be understood by reprisals? Stigmatization? Being approached by authorities? This leads Muslims to abandon his brothers and sisters? How can it be that Muslim preachers and activists who have dedicated themselves to Islamic work refuse any support, only out of fear of being pushed into a corner? That cannot be. It is the duty of scholars and Muslim activists to visit the liberated areas and see the situation for themselves, even if it seems unpopular. Raising awareness must be done. Syria’s Muslims need support. Despite much progress, there are shortcomings. Millions of refugees must be cared for and their right to education guaranteed.

The Syrian revolution is far from over and even if many things seem gloomy, there is light on the horizon. But this light will not be perceived if one has turned away. Therefore, it is not acceptable that every hotbed of conflict or distress in the Muslim world should wither away to a flash in the pan and be supported only as long as it is considered popular. This is neither humane nor Islamic.

The views expressed in this article are the author’s own and do not necessarily reflect Levant 24’s editorial stance.

A new Press Code in Idlib: Regulation or Restriction?

Idlib government`s protection of minorities put to the test