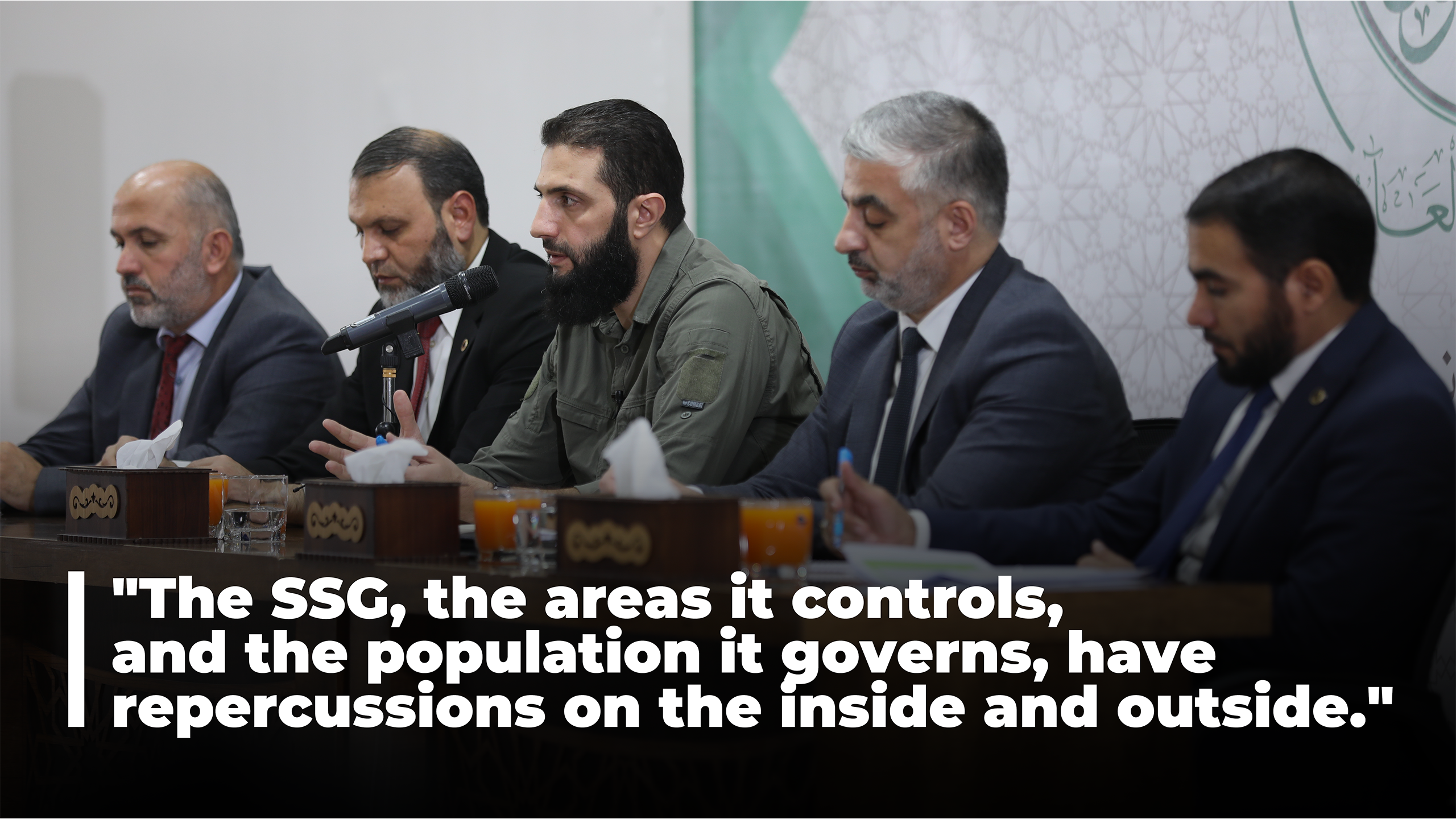 The Syrian conflict has long since been pushed out of the mainstream news. For many, it appears that the Assad regime has prevailed. Hardly any attention is paid to what is happening in the last liberated areas in the north of the country. Idlib province and small parts of western Aleppo are still controlled by revolutionaries, militarily dominated by HTS and administered by the Syrian Salvation Government (SSG). Accused of being the civil face of HTS, what challenges did it face since its inception?

The SSG was established in November of 2017 as the culmination of an initiative known as the Civil Administration Initiative of the Liberated Areas (CAILA) project launched earlier that year. The goal was to unify the governance in the liberated north, primary Idlib province, which had previously seen military affairs, policing, general security, and prisons and courts mostly run by a disparate conglomeration of military factions, while civil affairs were administered by various local councils.

SSG administers affairs in Idlib governorate and part of the western countryside of Aleppo, which comprises of ten ministries and six directorates all of which serve a population of 4.5 million people, 1.7 million of whom live in IDP camps. The General Shura Council, which serves as a quasi-parliament, oversees the various ministries and directorates and elects the SSG’s prime minister as well as setting policy in accordance with its mandates and directives.

Over the years since its founding the SSG aims to fill the vacuum left by an absence of government, as Center for Global Policy analyst, Elizabeth Tsurkov writes, the “SSG attempt[s] to compensate for the absence of state institutions,” but “lacks the resources to fully meet the needs… of the inhabitants.”

The Elephant in the Room

Among a lack of resources, the project has faced concerns over its relationship with HTS, listed as a Foreign Terrorist Organization (FTO). Silvia Carenzi, Fellow at ISPI’s MENA Center addresses its terrorist nature writing, “[HTS] sought to distance itself from the models of militant Islamism embodied by [AQ] or ISIS, showed more pragmatism, and expressed a willingness to engage with regional countries as well as the international community.”

Many doubt HTS, and its relationship with the SSG, as Majd Kilani of Jusoor Center for Studies told L24, “the SSG should prove its effectiveness and that it is not a tool in the hands of HTS,” highlighting a conception that the SSG is, at best, the “civil wing” of HTS and at worst a front for the group’s local administrations. Nisreen al-Zaraee and Karam Shaar of the Middle East Institute state that the SSG is a means “to provide the ‘legal’ and administrative frameworks for HTS’s takeover of the region’s economy and resources.”

However, a research by analysts Jerome Drevon and Patrick Haenni states, “SSG participates in HTS’s power strategy but cannot be considered an offshoot of the management of HTS or its civil branch.” Drevon says the SSG administrative committee “acts as a pseudo parliament [representing] different regions of Syria, sectorial interests, and communities,” while mentioning that “SSG and HTS structures overlap in some areas.”

This overlap is most common in the security sectors where HTS acts as the military of the region and supports and participates in security operations in enforcing local laws, when necessary, and maintaining public security. A 2020 COAR Report stated: “There are several explanations for the complex relationships between the SSG, HTS, and the patchwork of administrative institutions in northwest Syria. Indeed, HTS attempts to maintain a balance between its direct influence and the preservation of the quasi-independent status of governance structures that are needed to legitimize civil and economic entities in areas of its control.”

Despite the dearth of resources and international support, SSG representatives told L24 they try to make providing, maintaining, and advancing services a priority, as government official Engineer Qutayba al-Khalaf elaborates, “organizing procedures and taking steps to provide and upgrade services in the liberated area  at a level consummate to the advancements of other countries is a high priority.”

Dr. Ahmed Zaidan, former Al Jazeera journalist and analyst added in a conversation with L24, “without a doubt, the path planned by the [SSG] is making good progress and development, to serve the people, despite the lack of resources,” he continued, “when the revolution decides to work to serve the people, they will find [a way.]” SSG Director Dr. Muhammad Mosattat concurs, saying about the Syrian people, “They don’t languish, their concern is to serve their religion and families, and this, by the grace of Allah, is one of the fruits of our blessed revolution.”

Even prior to the revolution Syria was still a developing nation, while in the midst of an ongoing conflict, it’s doubtful the SSG will be able to provide the same services as most governments.  Dr. Zaidan commented, “as for the comparison with the areas under (SNA) Turkish control, or the SDF areas,” he assessed, that “the quality of (SSG) services are definitely better, and the existence of a centralized decision-making body, has made it easier for people to obtain their rights, and to develop services for them.”

Regarding the regime-controlled areas, the Economist ranked Assad’s capital, Damascus, as the “least livable” city in the MENA region for the second year in a row, citing corruption, mismanagement, and lack of basic services among the reasons for the poor quality of life.

Concerning economic and infrastructure advancements Mark Temnycky, a Wilson Center analyst, wrote , “the SSG facilitated the arrival of electricity to Idlib in May 2021, after several years of interruption, by agreeing to the work of the Green Energy Company (GEC). The SSG also granted Syriana Communications Company, last May a license to operate as the first cellular operator in the region,” an SSG spokesman told L24, “The number of licensed commercial and investment projects reached 283 projects in Idlib from the beginning of 2021”.

Hamdo Al-Jasem, an SSG PR representative mentioned the importance of “maintaining progress and development,” saying, “the liberated areas are in need of large-scale growth,” Al-Jasem continued, “the Bab al-Hawa Industrial City project, has more than ten operating facilities, with over 30 facilities under construction, and will provide over 15,000 jobs.” In addition to commercial, there are several civil service projects, as one SSG representative elaborated, “we seek to invest in solar energy to operate drinking water and irrigation stations,” he mentioned contracting the E-Clean Company to handle waste management and public hygiene and “to initiate recycling, beautify our country and protect the environment.”

Major Maher Hilal of the Ministry of the Interior told L24 they had striven, “to improve public services and maintain stability” by “issuing driving licenses and vehicle registrations,” and increasing safety by renovating and widening roads, implementing speed limits, monitoring traffic and roads and building “new police stations and civil registry secretariats, enacting electronic correspondence to facilitate transactions, and automate and archive records,” as well as launching a national ID initiative.

While projects like the Ministry of Agriculture’s distribution of seed, fertilizer, and diesel to stimulate the growth of essential crops like wheat and bolster agriculture, and the Ain al-Zarqa Irrigation initiative, watering 200 hectares of land were deemed successful, not all initiatives have been well received, as Temnycky mentions: “Results have been mixed. In December 2021, HTS promised to subsidize bread through SSG-run bakeries to combat rising food prices. But in March 2022, the government raised the price of grain, flour, ghee, and other food staples after Russia’s invasion of Ukraine triggered a global wheat shortage. Residents have complained that the HTS control of trade led to food shortages amid high rates of poverty and inflation.”

A Key to Peace and Stability

The West and international community have a vested interest in a stable and prosperous SSG as Tsurkov writes, “Western priorities in Syria – such as preventing the outflow of refugees, and constraining and weakening [terrorist] groups. [Can be addressed] through engagement with HTS and the SSG.”

Thus, the impact of such a project extends far beyond the immediate borders of its administration in northern Syria as Dr. Zaidan concludes, “Certainly, the project of the [SSG], the areas it controls, and the population it governs, has repercussions on the inside and outside. Internally there are services offered to four million people, and abandoning them will lead to disasters. Internationally, the control of the border (Idlib-Turkey) provided a state of security and stability in Turkey and Europe, including the prevention of illegal migration and the flow of the Assad regime’s drugs… Therefore, the state of stability (in Idlib) is an international requirement, not just that of the liberated areas.”