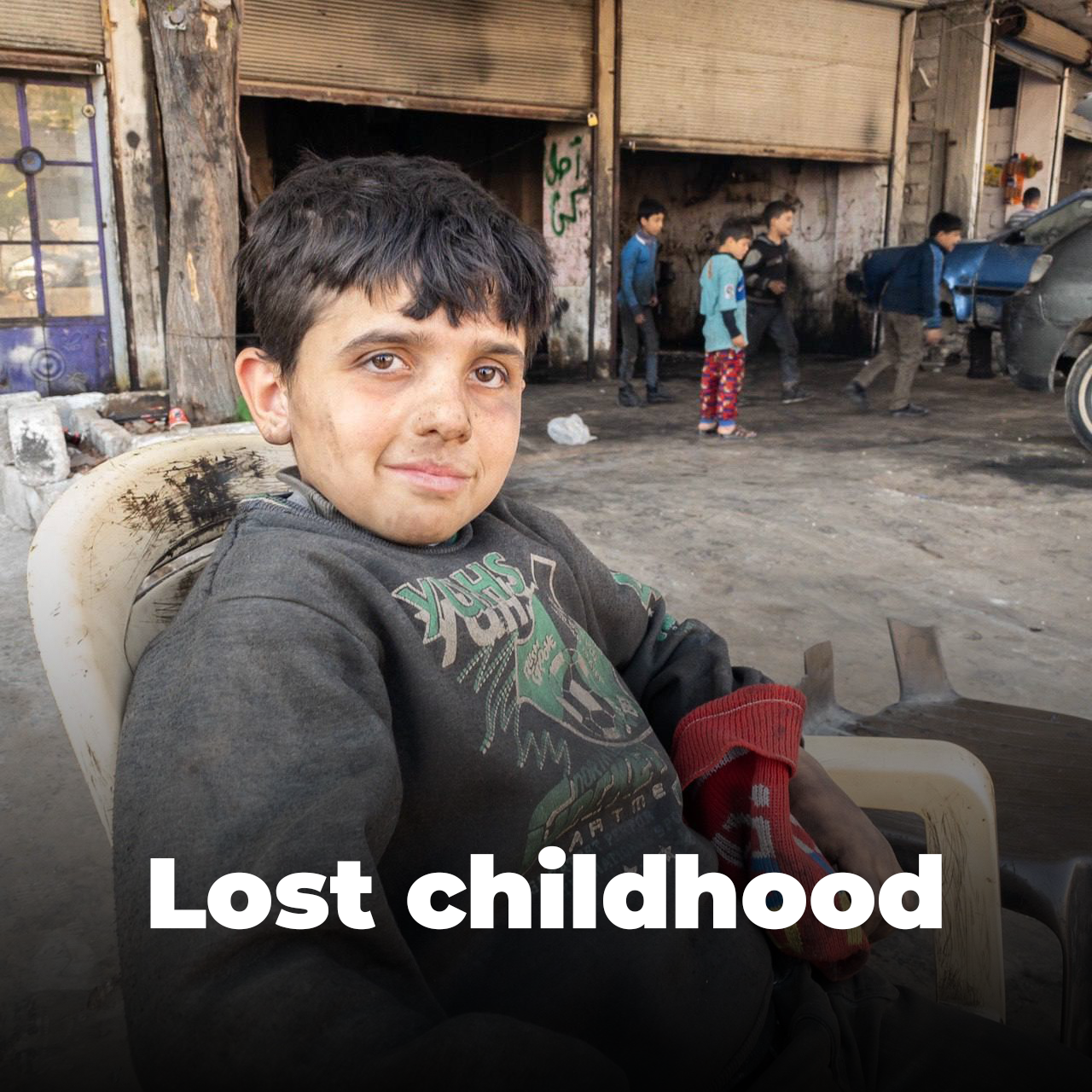 One of the bitter outcomes of a prolonged war is the ruined lives of innocent children who are forced to take up the responsibilities of adults. In a region where child labor is common within poor societies, more than a decade of war has increased it to alarming proportions. Declining economic conditions and mass displacements forced children out of schools into the labor market, where they are compelled to work grueling hours in hazardous conditions. The dire consequence is a society on the verge of losing a generation to the abyss.

From the streets of local markets to the industrial zones, the sore sight of children settling into the workforce has become a growing trend in Northern Syria. 11 years of war and deteriorating economic conditions have left parents with no choice but to send their children to work to make ends meet. Jihad Galad, the father of five children aged 9 to 16, speaking to L24, “If I have the money, I will not send my children to work, but due to the difficult financial situation now there is no alternative.” Trapped between two hard choices, Galad’s hand is forced, “…we are facing the winter season, and if my children do not help me with work, I will also be unable to secure the expenses of this harsh season in terms of heating materials.”

In addition to the worsening financial situation of families, the loss of the primary breadwinner, due to the Assad Regime bombings or imprisonment has compelled children to work to provide for the remaining siblings of their family.  Fadel Abdul Ghani, Executive Director at SNHR told L24, that the main reason for child labor is that, “… a large part of these children have become the main breadwinner for their families because many of them lost their parents or older brothers. Today, we have thousands of paterfamiliases who were killed or arrested and forcibly disappeared.”

Such cases are a dime a dozen in the liberated areas. There is the case of a family of four, of which the father was imprisoned by the Assad regime. Their eldest son Yasir, who is only 11, and his younger brother Salah, who is 9, work in a workshop in the industrial area of Idlib city, which is a frequent target of regime airstrikes. Another case is Ibrahim Kaddour, whose father has been detained since 2012 and who works in a car repair shop to support his family of three siblings and his mother. Similar cases to Yasir and Ibrahim are common among the population of Syria today. These circumstances make them lose hope sometimes. “I write with friends in Sweden. Then, when I compare their situation with mine, I think about following them and how I could better support my mother from there, too,” Ibrahim says. An attitude that is becoming more and more widespread among Syria’s children and youth.

Although child labor has been common since the beginning of the war in Syria, the last few years have seen a rapid increase. According to a report by SNHR, the last military campaign by the Assad Regime in December 2019 against the liberated area of Greater Idlib, caused the displacement of one million civilians, some of whom had already fled other parts of Syria. Abdul Ghani said, “The regime is the main cause of this outrage; all of this is the result of the bombings that it conducted throughout the years of the revolution on entire cities, which led to the displacement of these families and also caused the disappearance of thousands of Syrians”. He added that there is another reason for the spread of child labor “…deliberate bombing of schools by the regime, which prompted the children to drop out due to fear and to go to work.” Ahmed, a 16-year-old boy from Idlib who works in the industrial area of Idlib City manufacturing milk buckets spoke to L24. He said, “I was in school and left it in the seventh grade because of the bombing and airstrikes. I loved school and education very much. After the displacement, I had nothing to do, so I came here to learn a profession despite its difficulty, but in the end, I will learn it and master it, and from there I will be able to meet my family’s daily needs.”

Assad’s twist of the knife

The Assad Regime and its allies’ criminal practice of targeting schools has significantly impacted the number of students dropping out of school to enter the workforce. The last military campaign is a proof to this. Maher al-Hamdo, Director of Basic Education of the Syrian Salvation Government (SSG), speaking to L24, said, “The bombing of schools and the destruction of structures led to students dropping out of education, and the issue of displacement led to many students not enrolling in other schools.” Although the exact number of school-aged children that entered the workforce is unknown, Hamdo said that school dropouts since the last displacement are around 26 000. Ibrahim al-Daghim, an owner of a workshop in the industrial area said, “Every day school drop outs, seeking to learn professions come to me, as we all know that the profession (work) is good, but education for the child is better. The living situation is difficult for the parents. Therefore, we find that most children work to help their parents with daily expenses.”

As more and more children drop out of school to support their families, it adds to the fear of a catastrophe in the not-so-distant future, an uneducated generation of Syrian people. Speaking about the repercussions if child labor is not dealt with, al-Hamdo said, “The consequences will produce ignorant generations, which leads to the deviation of the compass of this generation towards crime and family disintegration.” According to a survey by the ‘Save the Children’ organisation, by the end of 2019, an estimated 2.45 million children were out of school in Syria. This creates a hole in the growth of the economy. If this is not addressed now, in a few years, a generation of Syrians will lack professionals in different fields resulting in a stunted economy.

A problem with no solution?

Despite the seriousness of the problem, child labor cannot be resolved within a short period. However, other courses of action and solutions can be enacted to contain it. Abdul Ghani discusses the options, “The process of ending child labor is very difficult because it is legal in international agreements under certain conditions and circumstances…, but the idea here is how can we control the problem and how can we prevent or reduce the worst forms of child labor?” With regards to stopping child labor he said, “This is very difficult, especially in the Syrian situation, for several reasons, the most prominent of which is that these children have become breadwinners for their families.” When posed the question to al-Hamdo (about) what the SSG is doing about the matter, he said, “The government seeks to bring the matter of child labor under control but the possibilities are few. The Ministry of Education seeks instead to establish schools and educational centres to curb this matter and completely eliminate this issue.”  Last month, the General Shura Council of the SSG held a meeting to discuss solutions supporting the education sector, after several organizations stopped funding schools across Idlib resulting in them being shut down. In the meeting, it was concluded that funds from several other sectors would be redirected to be provided to the educational sector.

The issue of child labor has reached a tipping point, if no steps are taken it could have serious consequences for the future of the Syrian people. The process of rehabilitating children from harmful working conditions and integrating them back into educational programs requires both resources and assistance from international partners with experience in these fields. Syrians hope that, although the world is focused on the humanitarian crisis caused by the war in Ukraine, donors and governments will remember their commitments as this war enters its 12th year.