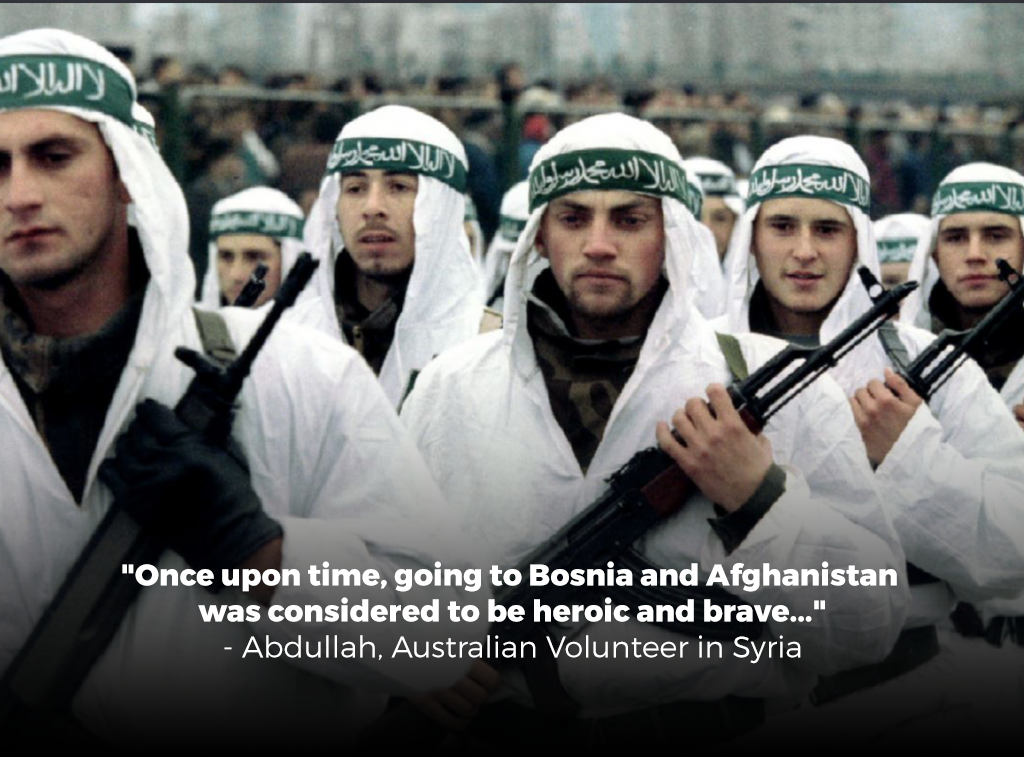 “Every friend of Ukraine who wants to join Ukraine in defending the country, please come over. We will give you weapons,” said Ukrainian President Volodymyr Zelensky in late February, concluding with the statement, “everyone who is defending Ukraine is a hero.”

Perhaps for the first time since the Spanish Civil War of the 1930s, there was officially an open call to arms for foreign volunteers in a European conflict. While the idea of a foreign legion is not new, both France and the UK have foreign legions dating back to the 1800s, contemporarily such individuals are often referred to as “foreign fighters” – even when incorporated into existing state militaries.

The term “foreign fighter” is a loaded term often synonymous, in the minds of many, with criminality, terrorism or illegitimacy; it’s also misleading and inaccurate, in cases of non-combatant volunteers. In the beginning of his book, The Universal Enemy, Dr. Darryl Li writes, “shift in perspective is necessary to understand the history of […] universalist project[s], which also requires thinking beyond the category of the ‘foreign fighter.’”

Transnational volunteers, which include, fighters, humanitarian workers, medical personnel, trainers, educators, and those performing logistical, auxiliary, and advisory capacities more adequately encompass the broad functions and roles such people often fulfill in conflict zones while allowing a more nuanced and unburdened approach to the subject free of the connotations of such restrictive terminology. L24 set out to contrast the motivations and experiences of these individuals in Syria with those in Ukraine in hopes of attempting to understand these transnational volunteers and the conflicts they are involved in.

Why do they go?

Most transnational volunteers say a sense of moral obligation and shared ideology are the most frequently cited motivators for people to take action. Troy Offenbecker, a former US marine now volunteering in Ukraine, told Willy OAM in a video interview, “I feel like [it’s] an answer you hear a lot, but I couldn’t sit at home after seeing what they (Russia) did in Bucha. To just sit around knowing that people are being murdered.”

L24 spoke with an Australian volunteer in Syria, “Abdullah” who left “a good caring family” and a “stable and well-off life” in Australia to volunteer in Syria. He was also moved to action by what he saw and read of suffering in Syria saying, “watching those atrocities, people being gassed, massacred and killed in groups, young and old women being violated and raped daily, and other crimes committed by a ruthless dictator, I felt I had to do more and so I decided to go and help and be utilized to serve the oppressed people of Syria.”

Isaac, a volunteer from the US told Inkstick Media, an US-based news platform, he was driven to go to Ukraine due to shared values and a sense of justice, “I thought that Ukrainians were standing up for the same values that we have in the US and many other countries, and it was unfair and unjust for the Ukrainians to be fighting alone. So I felt compelled to provide my service and experience to see what I could do to help.”

Like so many who went to Syria, Muhammad, a 32-year-old Canadian volunteer in Syria spoke to L24 mentioning finding common ground in shared faith and values, “it’s a religious obligation in the first place and a human obligation in the second, I used to always try to help others, however I could, even back home.”

In an interview with POLITICO spokesman for Ukraine’s International Legion of Territorial Defense, Corporal Damien Magrou said, “The common feeling for everyone who’s come and signed up in the legion is that ‘we had an urge to do something about it’. ‘We can’t just watch passively as the bombs are falling on civilian targets in the big cities of Ukraine.’”

This same sentiment has been echoed by countless volunteers throughout history, the urge to act, the feeling of an obligation to help even when no state or country will, as Abdullah mentioned, “it is indeed a moral obligation, in whatever way it is possible in one’s capabilities, to help those who are in need, whether this may be here in Syria or other places where Muslims or any others are suffering.”

The statistics speak a different language

“Everyone …defending Ukraine is a hero.” It was a bold declaration but one that the majority of the West accepted and parroted. Although not everyone going to Ukraine was, in fact going for altruistic purposes, the default presumption was that they were heroes and their actions laudable. Conversely, anyone going to places like Afghanistan or Syria was, by default, the antithesis of “heroes,” they were “terrorists.”

Regarding Ukraine, Abdullah said, “There are thousands who flocked to Ukraine, from different parts of the world to fight the same nation (Russia) that invaded Syria in 2015 and the world’s reaction was positive, while for individuals who went to Syria, the opposite reaction was shown.” He added, “Of course I can understand that the atrocities of ISIS have cast a bad image on us. However, to lump us all together is incomprehensible to me. After all, there were so many groups and only a minority joined these maniacs.”

The statistics seem to prove him right. Regarding the phenomena of ISIS, a 2014 report on Syrian “foreign fighters” by the US-based Soufan Center (TSC) mentioned that less than half, 40% of foreigners in Syria joined ISIS. The report also stated, “while less noticeable … than those who have joined the more extremist groups, foreigners have also joined constituent parts of the Free Syrian Army. For example, … about 25 (foreigners) had joined the FSA compared to 20 who had joined extremist groups.” The reality on the ground seems to show that in both Syria and Ukraine extremist elements such as, but not limited to, Neo-Nazis or ISIS are statistical minorities. However, their presence and threat are often magnified for sensationalism, propaganda, or political motivations.

For example, much has been made in the media, especially Russian media, about Ukrainian extremist groups and foreign fighters like the Azov battalion, considered by most to be far-right hardliners with fascist leanings and ties to Neo-Nazi movements. However, as mentioned by a recent Russia Matters report there’s been a gradual shift of the Azov regiment away from right-wing ideology, the report also states most fighters in Ukraine seem apolitical with the presence of white supremacists and other extremists negligible.

Regarding the apparent disparity in the outlooks of Syria and Ukraine Dr. Lamis Abdelaaty, a Princeton-educated political scientist wrote, “Even though the crisis in Ukraine has captured the world’s attention and evoked sympathy, some of the images we’re seeing are almost identical to those coming out of the Syrian crisis. … devastation in the urban areas of Ukraine is the same as those from the aerial bombardment in Syria. Women and children are on the run, terrified, carrying what they can and leaving everything else behind. So why is it the Ukraine crisis has generated such an outpouring of support while others have not?”

Muhammad comments, “This is unjust and a double standard that the West has towards Muslims. We had non-Muslim aid workers that came and worked in Syria but never had any trouble back home, at the same time we have Muslim aid workers here, and some of them have had their passports revoked. I saw on the news Canadian civilians coming to Syria and fighting in the ranks of the SDF (Syrian Democratic Forces, a Syrian PKK affiliate) and they were portrayed well in the media, why is that? The answer is clear.”

While Muhammad feels the root is anti-Islam prejudice, a Canadian sniper on the front lines in Ukraine, calling himself “Wali,” offers a different view telling the Christian Science Monitor, “ISIS (in Syria) was far away, it was terrible, but it was small. They could not threaten the world’s security or the future of the economy of Canada. My perception is people feel that these things that are happening in Ukraine can influence and bring consequences, terrible consequences, to the way we (Westerners) live.”

In Ukraine and Syria, we see two conflicts marred by nearly the same human tragedies of suffering caused by a disregard for humanitarian law and basic decency. Women, children, and non-combatants are brutalized, terrorized, tortured, raped, abducted, and murdered while entire cities are leveled and millions are displaced. Yet despite these similarities, even in the belligerents, namely Russia, we see two very different levels of sympathy and support that leaves us to examine and ask what makes the suffering of one human more or less worthy than another?

“Once upon a time,” Abdullah told L24, “going to places such as Bosnia and Afghanistan was considered to be heroic and brave for helping the oppressed and needy, but nowadays, unfortunately, it seems whenever it comes to helping Muslims, it is frowned upon, or seen as supporting terrorism and extremism.”

Abdullah laments the seeming inherent inequity of the global system saying, “a Muslim, or in general, individuals from a ‘third world’ country are viewed as less important than individuals from the West or a ‘developed nation’”.

While some look towards legislation as a means of redress Dr. Abdelaaty cautions, “We need to think carefully about why it is we believe some people are more worthy of support, compassion and assistance than others. We don’t need a United Nations treaty to define the limits of our compassion.”