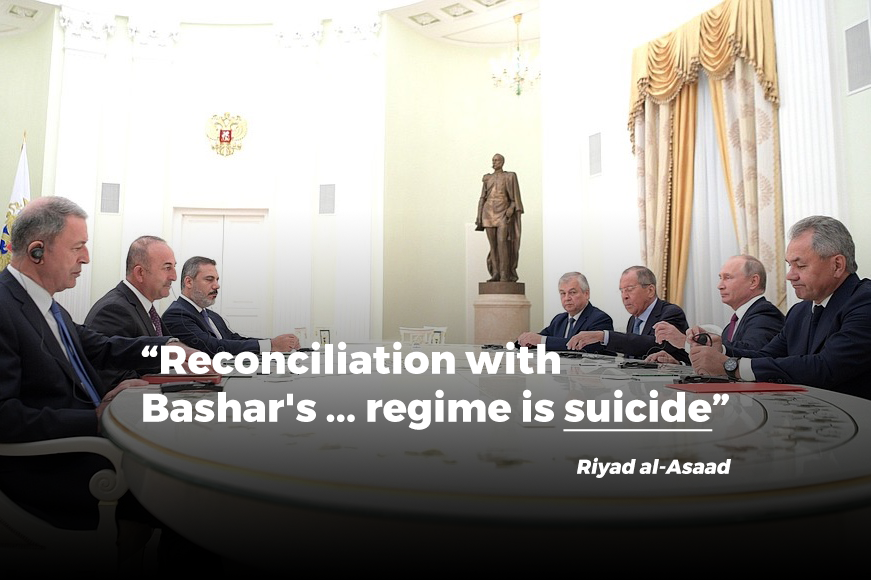 On the eve of a new year, in the last days of December; Russian, Syrian and Turkish representatives met in Moscow to make official what had been rumored since the summer of 2022. After over a decade of frozen and hostile relations, Turkey and the Assad regime would take steps to normalize their relations.

The meetings addressed four major points, the “safe and dignified return of refugees,” restoration of wealth and property stolen by the regime or military groups, the guarantee of a fair and transparent judicial process regarding violations of rights and war crimes, and the completion of constitutional amendments and fair and free elections. Among other issues was the withdrawal of Turkish troops, restoration of Assad control to the north, and tripartite cooperation against “terrorism.”

Yet, why now, and how are these developments likely to impact the Syrian people and their aspirations for self-governance and a life of safety and dignity? L24 sought to find the answers to some of these questions.

Syrian refugees are one of the primary reasons, most Turks want them returned to Syria, as analyst Aron Lund wrote in a report for the Total Defense Research Institute (FOI), “Turkish opposition parties have floated ideas for a change in the Syria policy, urging negotiations with Damascus on refugee repatriation. The idea seems to be popular among Turkish voters, and it also enjoys support from some of the president’s own allies.” After the ailing economy, the issue of refugees is the most prominent among Turkish voters.

Secondly, like so many before them, Turkey is beginning to see normalization as an inevitability, as evermore countries restore relations with the Assad regime. Tiina Hyyppä, a Helsinki-based researcher specializing in the civil action and rebel governance in Syria, told L24, “Turkey does not want to be left out of the group that engages with the ‘winning’ side of the war.”

The upcoming elections play a huge role in this regard as Hyyppä elaborates, “all parties in Turkey call for normalization and the return of refugees.” With so many in Turkey seeing normalization as a key stepping stone to the repatriation and return of refugees it’s important to the ruling party that actions are taken prior to the summer 2023 elections to show efforts towards this goal.

National security and counter-terrorism are also concerns, especially in regard to the PKK affiliate-dominated Syrian Democratic Forces (SDF), which has occupied large swaths of land in Northern Syria on Turkey’s Southern border. According to Turkish intelligence, the PKK has launched several attacks in Turkey this past year from SDF enclaves in Northern Syria and the removal of this threat from their border is a strong motivator for restoring channels with the Assad regime, and more importantly its Russian ally.

Turkey wants to remove the PKK from its border via military operations which cannot be done without a level of cooperation from Russia, which has a strong military presence in the country and has recently offered various levels of support to Assad and the SDF in certain areas of Turkish interest along the border. However, a spokesperson for News About Turkey (NAT), an independent news agency focusing on Turkey and Turkish politics doubts the level of commitment from Turkey positing that “this is not a sincere rapprochement. Erdogan just plays the ‘nice’ guy to convince Moscow to grant him a green light.”

With the elections, refugee crisis, and threats on its border it can be understood why Turkey is pursuing this path. What of Assad? The regime has demanded the full withdrawal of Turkish troops, and a full restoration of administrative control of all opposition areas, however, a complete withdrawal prior to the removal of the SDF is unlikely to benefit Turkish interests.

Hyyppä commented on the matter, “With their respective goals far from each other, it is not certain how fast a normalization process could be, whether it will start any time soon, or what it would entail in reality.”

While true that in terms of military goals and the Syrian opposition Turkey and Assad seem to have largely conflicting interests,  one area that they do find common ground is economic. Media activist Muhammad al-Ali told L24, “I believe that the impact will be clear economically.” One of the stated goals addressed at the Moscow meeting was the opening of the M4 highway connecting the coastal Latakia province, hosting a Russian base, with the more centrally located Aleppo.

However, Hyyppä points out that, “trade did not take off as hoped after Amman started to rebuild relations with Damascus.” Showing that Syria’s southern neighbor, Jordan did not achieve all of the aspirations it had following its normalization with the Assad regime nearly a year ago. In fact, Jordan has been plagued by a series of incursions on its border with Syria since normalization as various militias and cartels attempt to smuggle weapons and  drugs from Assad-controlled areas into the kingdom.

An End of the Revolution?

Some have been quick to assume that Turkey’s announcement of normalization means the Syrian revolution has come to a halt and a return to life under Assad’s regime is an unavoidable reality for all Syrians.

However, the political and military revolutionary organizations have been clear in their unified and staunch rejection of reconciliation with the regime, Riyad al-Asaad, one of the founders of the Free Syrian Army (FSA) said, “Reconciliation with Bashar’s murderous and criminal regime is suicide, despite all the circumstances we are going through. There is no peace or stability in coexistence with a fascist regime and the occupation of what is, by international standards, a murderous terrorist regime . Due to what they have committed of murder, torture, displacement, and the use of chemical and internationally prohibited weapons in the killing of the Syrian people.”

A member of Hayat Tahrir al-Sham’s (HTS) Islamic advisory committee, Madhhar Alwys, said, “Our stance against Assad and his regime is a non-negotiable principled stance and it cannot be thought of for many well-known reasons. Whoever approaches this regime represents only themselves, and cannot obligate a revolution and its people to do so.”

The leader of Jaysh al-Izzah, Jamil al-Saleh, had strong words encouraging the people to continue their armed revolution saying, “The first correct step is for the youth to join the factions that fulfill the demands of martyrs’ families and protect the constants of our revolution .”

Abu Muhammad al-Jolani, the leader of HTS, also released a statement affirming the groups dedication to continuing the revolution, in which he said, “our battle is not a political one in which people dispute over positions, it is likewise not a civil war inside one home. It’s a battle between truth and falsehood… we have prepared our equipment, and we have prepared ourselves for the great days to come.”

Regarding the Syrian opposition and revolution the journalist Levent Kemal comments, “Turkey has made it clear to both the Russian and the regime sides that it will conduct the negotiations in line with the UN’s 2254 solution proposal. From this point of view, nothing has changed for the opposition. Adhering to the 2254 solution proposal, Turkey will not make concessions to the Assad regime regarding the opposition.”

Despite the agreements between other states, it is clear that the revolution came from and continued through the efforts of the Syrian people themselves as al-Ali states about such agreements, “The revolution began in Daraa, the farthest province from Turkey, and then spread to all regions of Syria. So, the impact of this cannot go beyond the economy or politics.”

Which leaves one to ask, what of the people? How do the people view these efforts? Hyyppä, told L24, “People and opposition organizations in the Turkish-held areas and in Idlib have condemned any rapprochements… many say that they will continue the revolution .”

The Friday following the Moscow meeting saw mass protests erupt throughout Northern Syria, with thousands flocking to the streets in demonstrations reaffirming their rejection of reconciliation with the Assad regime and the people’s drive to continue their revolution. Several Arab tribes also donated 250 weapons to the Popular Resistance Brigades in a strong show of their will to fight until the will of the people is realized and the regime is toppled.

Kemal said about the Syrian people, “they will not make peace with the Assad regime … it is essential that the people in the opposition regions reveal their will,” regarding the Turkish public he said they’re “trying to understand the issue and its reasons. Because no one knows exactly why such a relationship was entered into with the Assad regime, which caused the death of Turkish soldiers and would not provide anything to Turkey,” saying, “no one is happy with this situation except the anti-refugee and pro-Assad Turkish opposition.”

A Long and Uncertain Road…

Regardless of the shifting political ties and landscape the majority of Syrians remain committed to their revolutionary ideals and struggle to achieve lives of freedom, safety, and dignity free of the Assad regime, after nearly 12 years of striving it seems unlikely the people will give up so soon and are prepared to spend perhaps another decade to reach their goals.

“Syrians have learnt new ways of organizing and demanding their rights,” says Hyyppä, “and these skills remain with the people. Some continue to work with humanitarian or human rights issues in Syria or abroad, some advocate for the release of detainees or prosecution of war criminals, others organize in the diaspora. Revolutions can take many years, even decades, and these skills can be of use later on.”

Notice: In the article “Turkish-Assad Rapprochement: Death of the Revolution? ” published January 3, 2023 the author attributed quotes from Tiina Hyyppä to Levent Kemal. L24 apologizes for the error which has been corrected January 5, 2023 and remains dedicated to providing accurate and informative content.